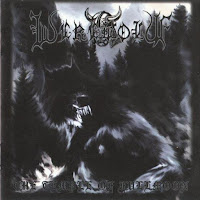 Perhaps one of the joys of Werewolf is the duo's irreverent sound and atmosphere, almost as if the tidal wave of raw 90s European black metal had never subsided and raged on gloriously into the next millennium, and perhaps it really had, but there's no question that The Temple of Fullmoon sounds more the product of 1995 than 2005. And that's no reason to complain, because at its core it this might just be all that matters...raw, roiling guitars performing in almost unanimously potent and 'majestic' chord patterns channeled directly from bands like Bathory and Graveland, reinforced with tightly clinging organs and choirs, or other synthesizer tones to give the band that complete 'Transylvanian' feel, as if their namesake lycanthrope was marching to war against the walls and ramparts of Castle Dracula. Grim, grisly, gnawing upon the cliche but evergreen fears of cold wilderness eves on a haunted landscape, this is banner-wielding black metal which is in turns both predictable and endearing.

This was the debut of a two-man act, both members also the complete lineup of the slightly better known Iuvenes which explored a more dynamic range over a larger body of recordings. Personally, I have always preferred Werewolf, not because of its purity of purpose but just that raw nostalgia it evokes. Chord progressions flow from slower to mid-paced rhythms which don't really attempt much nuance or technicality but seem to tap into that primal conscience of the genre, which for me is not likely to ever get old when issued with some sincerity. The drumming here is a bit flimsy, you can make all the snares and bass out but it does at times seem like a fractured scaffold about to collapse beneath the weight of the storming guitars and airier synth lines. This is not exactly a project one would turn to if seeking out musical proficiency...these guys aren't Ihsahn and Samoth, and what they create is material that any journeyman or even novice could summon, but that's also the appeal. The rustic sensibility of the riff construction collides with the nocturnal cathedral organs to create a sort of impossible, larger than life space in which the mind reels in stereotypical black & white Gothic horror footage, Hellhammer starring Peter Cushing and Christopher Lee. Bass is just kind of hanging out with the rhythm guitar chords, but it does contribute to the overall mood.

The decrepit snarling, possibly clotted with the Polish accent, doesn't possess a lot of dynamic potential or syllabic range, just sounds like some old creepy black metal guy living out of a cottage, narrating tales of terrible and hideous flora and fauna. I'm not fucking kidding, when you listen to this band's records, you can just picture Geralt the Witcher riding through the album with some top heavy harpy impaled upon his sword, trying to get to the local tavern and claim his reward before the night creeps too closely on his heels. The Temple of Fullmoon is far from brilliant, but it's got a great sense of time and place about it which makes it easy to break out and know precisely the sort of mood it's going to set for me. I believe the follow-up, The Order of Vril, released in 2009, slightly after Gray Wolf sadly took his own life, is the stronger of two albums, with a more magnificent blend of the band's symphonics and surging breakwater riffs, but it doesn't entirely fire this one. Recommended if you'd have loved a classic 1993-1997 era Graveland with stronger production, or if you're the sort to want to jam endlessly on Quorthon's mid-paced riffs circa Under the Sign of the Black Mark or Blood Fire Death. Big, dumb, carnal, engaging escapism.