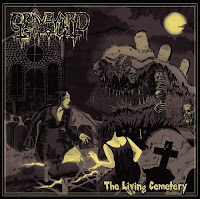 There's something so ripe and refreshing about unrepentant retro death metal which doesn't derive too directly from any one source, but attempts to tap into the genre's original pulse and jerk a semi original sound from i. Sure, if I were to scrutinize Graveyard Ghoul with a microscope, riff for riff, you'd be able to trace it all back to bands like Slayer or Autopsy or Death or Possessed or Cianide, but the last thing on my mind as I was checking out this sophomore disc is how it correlated to any particular band or scene, rather just serving as an amalgamation of all the dusty death metal records on your shelf. For that reason, and maybe that reason alone, this is a competent, genuine and enjoyable effort, if a little short on creating truly memorable, atmospheric moments that thrive due to their own brilliance.

Rhythm guitar structures have a very soiled, raw power to them that instructs a lot of the straight up open chords they jam out. They do occasionally use the morbid tremolo picking and eerie death doom patterns that characterized Autopsy or the freakier Death moments on their old discs, or get a little more pumped and thrashing ala Possessed and 80s Slayer, but there's also a straight shot of riffs which were directly influenced by the flow of old punk/hardcore which inspired Hellhammer and Celtic Frost, and this is reinforced by the vocals, which very often feel to me as if you'd taken Tom G. Warrior's inflection and then caked it with layers of Chris Reifert's louder, barking graveyard grime. Just enough reverb for resonance, and this creates a stark, nihilistic tour guide for the afterlife. Drums are crashing and perky with a very live feel to them, and bass lines only seem to matter in so much as they fatten up some of the rhythm lines. Samples and synth lines are extremely sparse here, utilized only to add a tiny bit of a thematic horror effect, which is cultivated more purely through the lyrics and unremitting darkness of the entire disc.

It doesn't possess an semblance of nuance. It doesn't have a lot of catchy riffing which would help it catapult it onto the scene's radar at large. Whereas an album like Gruesome's Savage Land will live or die based on how many OSDM fans are nostalgic for something they once found so sincere, The Living Cemetery is more like a snapshot of an entire musical medium's evolution at one point in time, when it was creeping out of the cellars and basements to an audience seeking something more raw and gloomy than the ailing thrash metal of the early 90s. It's an album you don't really listen to for particular moments, but when you're in need of around 30 minutes of wayback machine. It's not even the greatest example of such a sound, but for what it's worth, this is very much functional and helps darken a room or a mood. Dinosaur death metal done for those without pretense or expectations, who will probably just appreciate it as a blood thinner for those clotted arteries of antiquity.