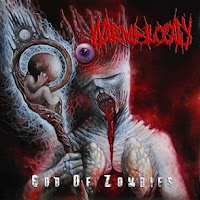 God of Zombies struck me as interesting because it sounds like someone mashed up the progressive death metal finesse of 90s Chuck Schuldiner with the incendiary pep of Sweden's melodic death scene during the same period, and then seasoned it with just a modicum of tech death flair circa stuff like Necrophagist or Arsis. But WITHOUT all the overbearing excess wank that sort of fusion might entail. I was not expecting a lot from this, checking it out based solely on the cover art, and fairly ignorant of the prior two albums they had put out. But I'm glad I did...it's hardly inventive and it's not the sort of thing I'll be listening to forever, but Warmblood's unwillingness to fit too snugly into any one corner of the death metal spectrum works in its favor and provides at least an engaging experience not void of some dexterity or dynamic range.

The album thrives on a contrast between it's thinner rhythm guitar tone and brute guttural vocals. The former isn't going to be for everyone, since it saps the music of some of its potential strength and brutality, but at the same time it ensures the listener is cognitive of each note sequence, of which there are many across the 10 tracks and 37 minutes. Tracks like "Unfaithful Celebrant" implement very clinical sounding harmonies and drifting, fusion inspired leads which definitely bring to mind bands like Atheist, Pestilence, Sadist, Death and Cynic, without sounding directly like them. A lot of sleek, patient thrashing riffs below, and a nice, rounded bass tone which deflects just enough from the rhythm guitar that it really contributes to the overall flow of the effort. Drums sound pretty clear and straightforward...this isn't material which requires the most intense and energetic of beats to function, but it once again invokes a sort of surgical aesthetic to the music which wants you to know exactly where each scalpel is making its incision on your ears.

Perhaps unconsciously, the album's better material seems to arrive at its mid and late points, but the opening few numbers are just good enough to whet the aural appetite and lock me into my seat for the rest. The synthesizer intro does well to evoke a little of an 80s horror aesthetic, though the cleaner classically focused guitars of the outro "Ite Missa Est" aren't all that great by themselves...they would have been a good setup for a song somewhere during the track length but don't really feel like an appropriate closure. But this is a minor scratch on an otherwise polished and attractive surface. The Italians will most likely have some appear for those who crave their countrymen like Gory Blister, Sadist, and Illogicist, or the final three Death efforts, but those brief infusions of goofier grooves, and the occasional insertion of At the Gates/Dark Tranquillity-like propulsion balances out the experience enough that not every song becomes an exercise in predictability. Potential here.