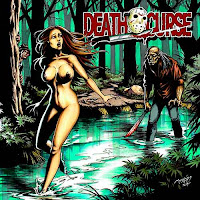 On its surface, Death Curse really seemed like an album I was bound to enjoy. Razorback has, in my estimation, a pretty good ear for the splatter/thrash material it releases, bands like Ghoul and Frightmare providing many hours of enjoyment and camp with actual quality riffing and hellish energy to back it up. You've got the great R-rated comic book cover artwork, the obvious Friday the 13th slasher overtures in the logo, and some creepy swamp guy chasing down a stacked, naked woman in a swamp. How in the fuck of all fucks could anything really go wrong here? Well, I won't say that anything really DOES go wrong...it just doesn't go very right either, and I came away a little disappointed if not wholly turned off by this Illinois duo's debut.

The goal here is boxy, chuggy Possessed-like thrash with a few escalations into speed metal, and I think the album at least starts out strong enough in that direction, with a Friday the 13th sample and a half-decent if generic death/thrash lick reminiscent of Possessed and Razor. The rhythm guitar tone is pretty raw and rich, the bass booming, the drums splashy and primitive, and the leads maintain that frilly, cheese feel to them which matches their modus operandi. The vocals definitely have a poor man's Jeff Becerra feel to them, only grainier and at times a little more visceral and unpolished, and this is one facet of Death Curse which does not work against them. In fact, when this album is all coming together, I am reminded of what I liked so much about albums like the debuts of Hallows Eve and Indestroy, and wouldn't be terribly surprised if all those were influences too. Tracks are pretty varied too, shifting between faster, nastier licks, creepy flowing proto-death metal pieces and then a few mid-paced headbangers ala classic Sacred Reich or Hallow's Eve's "Lethal Tendencies". Where Death Curse just doesn't stick the landing for me is in conjuring up memorable moments which can rival their precursors, and so it comes across as just a nostalgia trip that is more likely to cause its listeners to flip through their old records and relive those moments than to keep spinning this one endlessly...

And, granted, you can argue that such catalysts are a good thing. Yet the riff patterns are almost always predictable, where a few minor changes or dissonant surprises could have fastened them to the memory, and the choruses just don't capitalize on the momentum leading into them. Not incompetent, by any means, but leaving me dry instead of blood-spattered. However, I DO like the grittier production style on this, it definitely shifts me back about 30 years to second tier formative death/thrashers of the mid to late 80s. The lyrics do a decent homage to the cult films the band worships. I appreciate the sandbox Death Curse is playing around in, but I'm going to cross my fingers that this will serve as a sort of jumping off point from which they can challenge themselves a little more. Ramp up the raw technicality of the riffing just slightly to increase the possibilities. Incorporate both more savagery, and more atmospheric breaks, samples, or whatnot, so that I really feel like my head is on the chopping block, and not that I'm watching some umpteenth slasher sequel which they practically have to pay the networks to air late at night during their Halloween marathons.