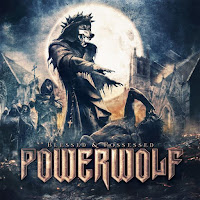 The past three Powerwolf albums have felt a lot like I was in the film Groundhog Day, reliving the same experience over and over with only minimal tweaks based on my own actions. Stylistically they've been on auto-pilot since around the sophomore Lupus Dei, but that was an excellent record with almost unanimously catchy tracks that showed the Germans at the limit of what they are able to accomplish and offer us. But since 2011 (and arguably 2009), the songwriting seems to largely have run out of ideas or nuances that could take their bombastic brand of lupine power metal to unheard heights, and even the cover art feels almost exactly the same with each new effort...fuck, swap up the color palette or something? I mean, resting on your laurels is one thing, hibernating on them is another entirely, and even though Powerwolf is consistent with regards to its production and musical proficiency, the returns seem to be diminishing, the receipts adding up to nowhere, and it's impossible to anticipate their releases with much joy when I feel like I could just switch up a few riffs from the last one and experience all the deviance and variation I should expect. It works for Motörhead, maybe a few other bands, but once in awhile you've got to go a little further over the top or you'll start scraping the bottom.

Granted, things aren't that dire in this Wolf camp, and Blessed & Possessed proves a serviceable affair with all the proper QC competence boxes checked off: Attila's soaring, sustained Ozzymass vocals hold up just as much as before, but the melodies and note progressions he belts forth often feel redundant to those he's already brought us. The song structures alternate between the slower, stand stomping meters and faster Euro-power rhythms, always dowsed in organ tone synthesizers as thick as any lycanthrope's hide, yet even where the tunes become the most pompous and you can just picture whatever audience actually likes this band donning their Dracula 2666 LARP costumes and shaking mugs of red-dyed light beer, almost like a Korpiklaani gig with more furries and fake blud. The leads are adequate, often the best parts of the entire album, and the Germans make sure to incorporate as many variations upon "Carmina Burana" as possible to break up the thundering beats and nigh endless choruses that the album feels like it possesses...to the point that even though verses and escalations are present, it still feels like there is little delineation betwixt the two. As a result, Blessed & Possessed too rarely gives itself room to breathe, it's so suffocated with self-plagiarism, vocal/percussion sequences that seem lifted directly from earlier tunes. Some tunes like "Dead Until Dark" and "Christ & Combat" still pluck at the silly strings that spawned my earlier admiration for just how absurd they were, but remain stagnant by the most glorious means.

You cannot, however, accuse the Germans of not giving you enough bang for your buck, if you are wise enough to pick up the Napalm Records 2CD version, which is comprised of ten cover tracks done up in all the requisite glory. These are all pretty obvious, like a pair of Judas Priest tunes off Painkiller ("Touch of Evil" and "Nightcrawler", of course), and some Ozzy and Sabbath, but they reach a little further with songs by Running Wild ("Conquistadores"), Chroming Rose ("Power and Glory") and it's quite nice to see them address that heritage. I actually prefer their version of "Edge of Thorns" to the Savatage original if only because I can't stand Stevens' voice and I like the emotional little trill Attila spits out here. A bigger shock is transforming Amon Amarth's "Gods of War Arise" into pure Powerwolf, it works as well as one might have hoped and solidifies the fact that, if little else, these gentlemen are professionals. They don't fuck around with lazy covers, even when making 'safe' choices, each are given a little of that personal spin...I'm not lying when I tell you that I dug the covers disc even more than a lot of the new material, and I think if you acquire this version it does increase the overall value of the package. Ultimately, Blessed & Possessed is by no means a 'bad album', assuming you just want more of the same, but I for one hope that Powerwolf conjures up a few more compelling ideas for its next moonlight symphony. I fear my interest was already waning with the last.