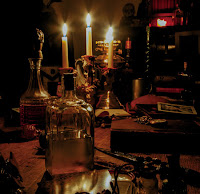 Black Sabbath. Electric Wizard. Black Magician. It stands to reason that there is aesthetic lineage taking place in the UK which seeks to refresh and perhaps embolden the roots of doom metal. My own attraction to bands like this is that I'm seeking out spooky and psychedelic swaths of atmosphere induced by evil riff progressions, deceptively simple bluesy grooves which teeter my imagination upon the precipice of darkness, horror and despair, only to yank it back into reality with workmanlike force. I sought after Black Magician for that very same reason, but while their 2012 debut Nature is the Devil's Church had its moments, others were tepid and/or dry; I simply didn't find it as evocative as other bands conjuring up antiquity like Seremonia, Blood Ceremony, Occultation, select Cathedral records, or the masters I mentioned in opening. Not to write them off, because I think these guys have their fingers on the pulse, they simply have to sink their collective fangs into that vein and sup on it.

The Pursuivant EP seeks to do just that with some stoic, majestic riffing interwoven with Gothic organ melodies. The best way I could describe the title track is as if Candlemass adopted a lot more of a 60s or 70s atmosphere with raunchier distortion, and they were joined by Lee Dorrian on vocals. Liam Yates adopts that same, vile sounding, no-fucks-given inflection which he'll spin off into some sustained gutturals, and comes across a lot like a 'poor man's Dorrian', with the exception that he keeps it really dingy and doomed and doesn't take a lot of the same charismatic riffs that his predecessor does within that limited range. It's interesting in how it really grounds the more grandiose concoction of the keys and rhythm guitars...as if to state that no matter how beautiful its sepulchers and monuments, the graveyard is still an ugly fucking place, and the ghastly caretaker is covered in the soil and remnants of the departed. The drums jam along with what is really a contrast in motions, from the lurching obelisks at its onset to the thickened grooves in the late bridge, and there is an undercurrent of that same prog rock you'll usually find as a cooperative inspiration for so many of this genre's practitioners in the 21st century.

The other tracks here deviate mildly, with the lush balladry of "Grene Knyght" led by its lush acoustic guitars and folksy yet stark, haunting harmony vocals...this is EASILY the best cut I've ever heard from Black Magician, and I would love it if in the future they could blend pieces of this quality with surges of heavier, atmospheric power chords. The vocals are just so much more interesting than the haughty growling. This tune is the one thing here I really felt like listening to over and over again for its dreamy departure to ancient English glades and spells and encroaching darkness. Things take another turn entirely for the closing "Black Henbane", which is more like an aggro doom, jammy nightmare rock & roll track festooned with banners of grating psychedelic organs, and simplistic leads which give off a trippy chase through a Hammer Films haunted house vibe, if it were enacted by surf bums. Kind of a strange, righteous closure for this 14 minute EP, but then it's nigh on impossible in such a limited space to really pace out material beyond its mere presentation. And that's really the major flaw of this format: The Pursuivant seems like a smattering, a mere sampling of ideas, several of which would have kicked royal ass in a full-length format where there is more space to flow from one pole to the next. It succeeds at that, but ends before your psyche has had the chance to truly get invested.