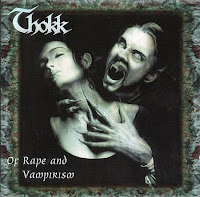 A justifiably bygone relic of another age, around the point the second wave black metal bubble was ripe to burst, Of Rape and Vampirism nevertheless stands as an interesting example of how indecision and experimentation can impinge upon the experience of an album. Valério Costa, probably better known as Lord Kaiaphas, who drummed and screamed on a few of the earlier Ancient discs and Grand Belial's Key demos, formed this project about the same time as he was embarking on those others. Here he is matched with 'Thegn Damieus the Marauder', some of you have likely listened to as 'Holocausto', guitarist of the politically incorrect, melodic US death metal mainstays Arghoslent. The cover image does well to give an impression of bloodsucking horror and extremity, perhaps in the vein of Ancient, Cradle of Filth, Abyssos, Hecate Enthroned, Siebenburgen, or one of many other such acts which haunted the gibbous moonlit landscapes and castle battlements of the mid-to-late 90s, in many cases to see their respective shelf lives come to a close once the black metal genre segregated into its now surviving tributaries.

The music, on the other hand, does not live up to any conceptual promise of any dark Transylvanian princes exploits, nor the eroticism and mystique surrounding the the theme. Five of the eight tracks are written in a typical black metal mold for the time, and for the other three the duo decides to go absolutely batshit crazy and attempt a more free form excursion into noise. Both 'halves' are plagued with individual flaws, but there is also an overlap: their mutual aimlessness and inefficiency. The 'First Evocation' suffers from slightly over-loud drumming, in particular the blasting and fills, which overpower the airy, fuzzy drifts of rhythm guitar that represent the one saving grace of the music, similar in structure to early Satyricon, Covenant or the first Old Man's Child record. Granted, they seem to have generated in any random order and placed within the context of the larger 'songs', but the melodic tremolo picking is tense and fluid, and there are even a few licks of nastier blackened speed/thrash metal which are always a joy when accompanied by better overall songwriting. Vocals are a stock rasp that occasionally errs on the side of uber-goofball due to some failed attempt at creating a manic, narrative quality. The low cleans are likewise laughable, but where it really falls apart is in how some of the screams are awkwardly coupled with lyrical lines like 'I want your fucking cunt/I need your live-giving blood!' on the title cut.

With the exception of the reappearance Kaiaphas' decrepit hag rasps, the 'Second Evocation' is a sequence of three noise tracks consisting of percolating, rugose, distorted loops which are capped off with frenzied, warped synthesizer noises, implemented to create an unnerving sense of tenseness and alien escapism; an ugly mirror for the gruesome buildups in cult horror flicks that would generally involve a chase or a stabbing or worse. This is clearly the creepier, more pathological material likely to evoke a shiver or sweat from the listener, and yet the experience is marred once the vocals arrive, which sound like a couple of drunk teenagers making a derision of the voices typically found in the genre. I can't tell if Kaiaphas was falling over himself with self-mockery behind the microphone, or if I'm actually meant to take this as seriously as the metal-driven material. While I have no aversion to minimalistic noise or drone or any form of nightmarish soundscaping, this seems all too sporadic and random, a failed parody of something like Abruptum rather than a genuine breaking of new soil like Fenriz did with his dark ambient Neptune Towers project. It's really just...kind of dumb.

In the end, Of Rape and Vampirism might have proven a workmanlike black metal EP had it cut off around the 20-24 minute mark, but extending it beyond that into the absurd more or less soils the material leading up to that point, which was by no means exemplary in of itself. Although there were a few passable and even enjoyable guitar passages, he had much better material to play on with any r Arghoslent effort chosen at random. The vocals are indistinct at best, silly and self- deprecating for the rest of the time. While hints of electronic experimentation are used as book ends for some of the earlier cuts, I doubt many first-time listeners expected it to go Full Audio Retard in its waning tracks, and there just seemed to be a massive disconnect between the two poles. With more integration of the loops and black metal rhythms, the record might have proven a more provocative, evocative anomaly, but here the contrast seem like a means to fill dead air; and there are far better thrills and chills to fill any frightful night. This stuff couldn't seduce a black mascara-drenched farm animal, much less a proper Goth.