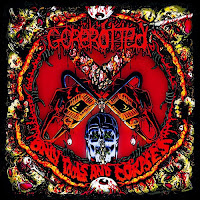 You know you're probably in trouble when the bookend samples for the first cut on an album are of the Crypt Keeper from HBO's Tales from the Crypt, that's about as obvious a choice you can get from the horror field apart from a Freddy Krueger quote or biting off the theme from Halloween. Also obvious is that England's Gorerotted were a bunch of young hopefuls barking up the tree of Cannibal Corpse, in particular the transitory period between Chris Barnes and Corpsegrinder...records like The Bleeding. I seem to remember a cloud of buzz surrounding their sophomore effort when it was released in 2003 through Metal Blade Records, but after going back to listen again, I was mistaken. It was merely flies.

That's not to say Only Tools and Corpses is a heaping helping of dogshit, but at best it was a fairly middling affair which probably just played upon some folks' nostalgia for the previous decade. I can't exaggerate how some of the death/thrashing verses in tunes like "Hacked in the Back, Dumped in a Sack" sound EXACTLY like stuff Cannibal Corpse was doing around the same time is this, though they often seem more reliant on bland tremolo picked progressions. Sure, they can lay out a thuggish groove from time to time which isn't going to disappoint one who's just there to throw his bulk about a pit, but so much of the material is centered upon the typical alternating 4x chug/burst mechanic that it continues to beat that script to death long after it was already passe. Vary rarely a sequence of notes will surprise you from nowhere, or they'll cut out to some syrupy bass playing which is reminiscent of Alex Webster's aesthetic, but by and large you feel like hearing one song here qualifies that you've heard them all. Not always going to be a problem for devotees of the genre, but the individual riffs and constructions just don't have the personality of their forebears, and it reeks of 'also ran'.

One area of distinction between this band and that other I keep mentioning would be in the vocals, which sort of trade off between four styles. You've got the standard, gruff beatdown-guttural which sounds a little bit like a David Vincent meets Infestdead, and then a rapacious stock snarls of the Deicide double-up variety. But then they'll also implement some of the deeper, gurgling inflection attributed to the more toilet bowl variety of brutal death metal, as well as some hooligan barks that sound like really pissed off punk or hardcore molded to the context of death metal. None of these are impressive or interesting, but there at least exists that level of versatility distributed at just the right amounts over the riffs. Lyrics exude a fine odor of Limey violence and misogyny: "Fuck Your Arse With Broken Glass" or "Zombie Graveyard Rape Bonanza", and they're fun if you're into that, but again, this was arriving at a time in which it was all old hat...not only did you have mainstream shockers like Corpse, but Gorgasm, Lividity, Mortal Decay, and on and on, many of which were just more vicious and memorable.

All told, Only Tools and Corpses is not a miserable effort, it's just too easily lost in the crowd. The cover art is by an artist who did a splatter comic called Tales from Uranus and has a fun style, and the mix of instruments here is functional and punishing. It just lacks for delivering the riffs that make me want to keep it around and listen through it consistently, and the few points at which I've gone back to it have me slaked for Bloodthirst or some other masterpiece of the medium.

Verdict: Indifference [6/10] (I find live people and I play with them)