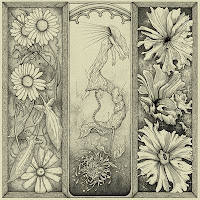 You know how sometimes you get a new record from a band that you’ve never heard of before, and it takes you a few songs or a few listens to really feel captivated by what is going on musically? Qliphoth is not that album. You will know after the first few songs whether you are all in or not, and I sure as hell hope you are because this is a great album.

Qliphoth opens with a tranquil vocal line, but it does not take long for the true form of Cloud Rat to manifest and unleash their incredibly catchy variety of grindcore. I honestly feel a little out of my depth even talking about Cloud Rat in terms of genre, as I mostly gravitate towards the more well known bands from the genre - earlier efforts from bands like Napalm Death, Carcass, and Bolt Thrower to name a few. And, well, there has been a hell of a lot of progress in the genre since the 80's.

Cloud Rat is loud, aggressive, and fast, but they punctuate the more turbulent riffing with moments of calm, giving you a chance to come up for air. Like clockwork, a string of loud, fast, loud, fast will be interrupted by a calm instrumental or an opening riff that gives you a time to brace yourself before the inevitable avalanche of noise that is about to drop.

In fact, my favorite portion of the album is the five song sequence that begins with “Raccoon” and ends with “Udder Dust.” “Raccoon” begins with a slow three note riff that builds to include additional instruments and eventually vocals. It is a nice resting place, after the onslaught of the previous three songs, and the songs that come after “Raccoon” are among the most intense on the album. Cloud Rat is at their peak on “Rusting Belt,” which channels all of the bands aggression into the first minute only to resolve in the spoken words “arson is a form of self-expression in a place where you can’t express yourself.” Vocalist Madison Marshall puts in a hell of a performance on this album, but this spoken line, the only one of the album, was the one that stuck with me after I listened to it for the first time. I have since looked at the lyric sheet that came with the record, but this one line feels like the thesis statement for the entire album. It is poignant and powerful, and if it doesn’t make you want to set fire to the suburbs then you’re not listening to it loud enough.

While I don’t think I can call this the best album of 2015 so far, it is probably my favorite. Unlike some of the more technically impressive efforts I’ve heard, there is something about Qliphoth that I keep coming back to. The record feels like bottled lightning in that they managed to channel all of their sound into aural catharsis, and I find myself wanting to flip the record and play it all over again when it’s done.