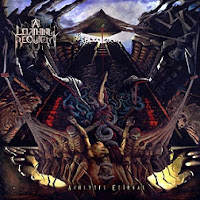 I was first exposed to Malcolm Pugh's A Loathing Requiem through a video review of his 2010 debut Psalms of Misanthropy on YouTube, though I've also heard encountered his work in a few other bands like Inferi and Diskreet. This project essentially takes a lot of Pugh's finesse as a musician, focuses it and intensifies it into a whirlwind of acrobatic chops that will probably have the tech death/Summer Slam audience prying their collective jaws from the pavement. What's more amazing, is that aside form a few guest spots, this is all Pugh...every instrument, just about every minute choice and detail found throughout the record, and it's frankly difficult to decide which instrument he's better at...

The bass lines are often just as busy as anything going on with the dominant, punchy and rapid-fire rhythm guitars. Beats are fast and precise, though they're pretty much par for the course when it comes to this niche within death meal. The vocals probably lose out here, since they're a fairly standard, monotonous grunt which lacks for dynamics beyond the expected, brutal punctuation. But when it comes to string-work, low end or high, Pugh is as practiced as nearly anyone you're going to find in that dense Californian tech death scene or, really, almost anyone in the world. Before I get ahead of myself, that's not to say Acolytes Eternal is comprised of the most memorable songs you're going to be humming to yourself in the shower; in fact, the note progressions whirr by with such a clinical celerity that they often seem to blend into one another. But, then again, that's the style he's working in, and anyone whose grown fond of records from acts like Necrophagist, Arsis, Fallujah or Decrepit Birth will find some familiarity in how Pugh puts all of this material together.

To his credit, there is a strict standard here for melody which accompanies the frenzied 'exercise' feel of the manic fret-work. Rhythmically, the guitars might seem too busy for their own good, but when it comes to leads or harmonies he reins them in so they drift memorably above that pacemaker shattering punch of the lower end. Where the material might have come across as proficient yet soulless, these elements, as in "The Mortal's Harvest" offer another dimension that keeps the mind engaged regardless of how many comparable tech death acts it has experienced. Tempos flit about like bats on fire. Ambient interludes and other tactics help to keep the more exhausting aspects of the music balanced off, and there is very clearly an overbrain at work, cautiously tweaking the entire experience so it feels complete rather than just showing off at every availability.

Is is enough? I would say 'yes', A Loathing Requiem has enough merit and musicality to warrant a listen even if you find yourself jaded with a lot of modern tech death for its focus on production and ability above songwriting. Let's face it, the purpose of discs like this is not to compose a bunch of anthems people are singing in arenas 30 years in the future (though wouldn't that be something?). It's not the age of Priest or Maiden, or even Death and Morbid Angel. This is an individual testing the limits of human endurance and attention-span, without going far too into the over-cluttered territory in which bands like Brain Drill have staked their claims. I didn't find the tunes here as compelling or visionary as Fallujah's The Flesh Prevails from last year, but keep in mind this is just one guy, and a frighteningly talented one. If Pugh's songwriting capacity and control catches up to his proficiency, we'll be in for something unparalleled. For now, Acolytes Eternal is a solid proof of potential...just don't blink or you might miss something.