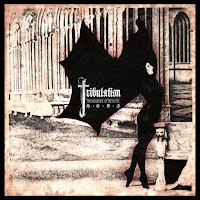 I am still of the mind that The Horror is the greatest thing Sweden's Tribulation has yet recorded, but that's not to say I'm any less intrigued when there's the announcement that they're releasing anything new. Yes, their explosive, rabid death/thrash origins have yet to be eclipsed by their experimentation, and the sort of constant reinvention they pursue is likely to earn the ire of many a purist; but The Formulas of Death was certainly an excellent departure into a murky swath of prog/death territory which hadn't been explored with quite the same sound. The album I'll turn to when I wish to listen more with the skull-brain and not the dick-brain spearheading my testicles. With Children of the Night, the Swedes have yet again morphed into a new state of being, one quite unexpected, and if you're in the mood for it, one quite poignant and passionate.

This is essentially a brand of melodic, melancholic death metal with simple chord patterns that are infused with cleaner licks, pianos, and other means to conjure up a more emotional response from the listener, and it works really damn well as long as you're not just jonesing to chew out the band for simplifying its sound a few steps below its predecessors. I've seen descriptions of this as 'indie rock' with growled vocals, and I'm not sure there's much merit to that statement, but certainly the songs take a shift towards the dramatic minimalism of pure heavy metal or hard rock and occasional chord patterns wouldn't be out of place on a driving, melodic punk record. The difference is of course that the little leads ("Melancholia") and the snarled vocal anchors it into a shadier terrain which really holds the attention if you're tracking down something which is catchy and relistenable, reminding me of what I liked a lot about an album like Sentenced's magnificent Amok or a bunch of other Finnish bands whose balance of aggression and melody was derived from the Amorphis sophomore.

Rhythm guitar patterns are quite simple in structure, but the chords issued are quite nice in conjunction with the leads, and every song bears some form of distinction, while functioning near seamlessly on the whole. Every choice of mood and shadow seems practiced and deliberate, the tempos are fairly widespread across the track list, and Johannes Andersson's nihilistic rasp is a great contrast to the sadness espoused by the instruments. I couldn't even name a singular song on here which I'd hold above the rest, because it's all so consistently wrought over the hour-long experience, and it's an album I've come back to almost as much as anything else this year. Lyrically it's also a mesmerizing record, paying ode to the personal horrors of nightmares and other intangible unknowns, a 'ghost story' as opposed to a visceral death metal record. To that extent, Tribulation have yet another winner on their hands, and I'd be lying if I said I didn't enjoy this more than the sophomore. The rare effort where the sum is the equal of its parts but any individual piece of music would be a delight taken out of the context of the entire album. Something unexpected, ethereal, but never lacking in the underpinning darkness of blacks & grays, midnight signals from haunted columns and cobbles. Aesthetically, a 'Gothic novel' of the death metal medium, its dread patient, not punishing until that very last moment when the curse or loss is recognized.