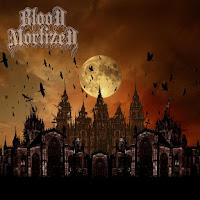 The haunted castle. The morbid fortress. The palace of exquisite tortures. So often do their images grace the albums of metal records which...fail to sound anything like they even belong in a courtyard or gatehouse of such a place. And yet, whenever I see an image like the fantastic cover of Blood Mortized's eponymous 2009 debut, I cross my fingers behind my back and hope I'm about to get that majestic, monolithic, vampiric evil sound I so project onto them through sheer imagination alone. These Swedes do not really sound native to such a vision, but to their credit, they could at least squat in the boneyard out front, or maybe around to the side. No more or no less worthy than any other Swedish death metal band adopting that aural blueprint of forebears Dismember and Entombed, they choose a fairly safe sound and just roll with it...to middling if not entirely ineffective results.

Yes, you've already guessed what the guitar tone on this disc sounds like, so I can only add that it's a little more dense and roiling than several of their other peers that have popped up in the last half of a decade. Blood Mortized exist on a precarious balance between the more melancholic, driving melodic brand of Swedeath pioneered by groups like Desultory ("Devil's Vengeance") and a more churning spin on the Entombed death & roll style adopted during the transitions to Clandestine and Wolverine Blues. They possess an almost suffocating level of atmosphere once those fat, meaty rhythms are blistering along on some painfully simple rhythm pattern and all manner of leads, bluesy and/or evil leads ring out and provide most of my favorite moments on the entire record, like during the bridge of "Wishing Hell". Vocals come in two flavors, one being a slightly higher pitched snarl, and the other being the L-G Petrov guttural grunts with a Klas Morberg's bark, and they're fairly well done if merely redundant to so many we've already heard to death. There's also a very big, bossy, bassy feel to the record that helps compensate slightly for the fact that half the riff progressions are completely uninspired and boring...

So this is yet another of those many cases where the production serves to give a heavier sound to a slew of banal material that nobody would pay attention to otherwise. Yet ultimately, there's enough packed in there, enough distractions that this is far from one of the worse of the retro Swedeath records I've heard, and at its best I'd even claim it was spot on. Individual songs aren't memorable to the extent that I'd seek them out individually, but if I was down for an endless loop of bands in this style and had just finished Mr. Death, Revel in Flesh, Entrails and others, this would fit the bill. Indiscriminate fanatics for the sound could do a lot worse, and when the band hits a lumbering level of groove as in "Funeral Ride" where the harmonies and melodies are ringing out over some of the nastier chord choices, it becomes sweltering, satisfying stuff. At over an hour, there is also quite a lot of it, and half the dozen cuts are worthwhile or very near that. Just wish it sounded as evil and inviting as it looked.