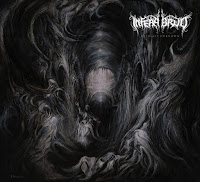 How to follow up what was possibly the best New England black metal demo/album I've heard since some point in the 90s? Carry on, and that is precisely what Boston's Infera Bruo have accomplished upon Desolate Unknown. A proficient paean to both the Norse and Swedish roots of its genre, which compares favorably to the more modern works of its enduring progenitors. Not quite so progressive in nature as what Enslaved, Ihsahn or Arcturus have written in recent years, but more of a balance of the style's primal precision and intensity as translated from late 90s Immortal or Emperor, and then further enriched by the inclusion of cleaner, mid ranged vocals which provide several of the record's catchier phrases. Beyond that, their writing style is such that you never exactly know what's around each corner on the record...will they drop off the blasting to focus on something more scarce and atmospheric? Will they soften the blows where appropriate?

Yes to all of that. Swelling dark ambient/ritualistic 'Segues' are placed at strategic points on the album to break up the duration of its lengthier tracks (9-13 minutes). Not merely noise, they also involve elements like eerie vocal looping or distorted voice samples. Acoustic guitars are brought out briefly, and the band will often just cede the structure and riffing to pure feedback which also ironically helps to smooth out those mammoth songs. But more vital here is the instrumentation. The bass lines often have a rough, distorted thrust to them which generates an excellent balance to the more pinpoint and polished tone of the guitars. Chord progressions, if not unanimously catchy, manage between just the right levels of dissonance and glory, and while they often occupy the same general terrain, few of them sound exactly alike, nor do they ever wear out their welcome through exhausting repetition which could turn a tune like "Ritual Within" or "Invoking Collapse" into a monotonous nightmare if mismanaged. The beats wander everywhere from the rock grooves necessary to fuel the mid paced Bathory rhythms, to the seamless blasts and double bass sequences; always pretty pronounced so that you can make out all the individual toms, snares and crashes, yet not overly loud.

Most of the vocals are dual black rasps which create a pretty effective gravitas against the energy of the drums and guitars, with loads of little flaws and deviations to keep the ears glued, and the cleans which are understated but excellent. If one were to strip out and analyze specific elements, I'm sure they wouldn't find Infera Bruo's material to be the most distinct or unique in the field, but they operate as a 'package deal', where every component of their creative process is well executed. Had Desolate Unknown been released by some second or third tier Norwegian band, they'd probably find themselves on a label like Candlelight or Indie Recordings in no time flat, that is the level of polish here. Along with Spaniards Foscor, these gentlemen seem like natural successors to the early 21st century evolutions of their Scandinavian forebears, a pretty big sandbox to play around in, and one that I am eager to see shaped further.