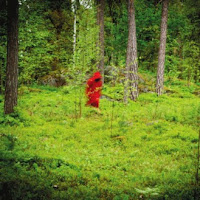 So often when faced with solo black metal projects like Cosmic Church I expect a very isolate, tortured tone to everything. But whilst that might hold true for the vocals of Luxixul Sumering Auter, the Finn behind this and several other outfits, the music on exhibition here is far more outward and expansive, so much so that it seems to course and stream across such landscapes as the robed cover figure (presumably Luxixul himself) roves across. That's not to say this album-length EP of material doesn't maintain a personal touch, but it's certainly louder and more bombastic than you think you're investing in by its appearance alone.

Which is not a bad thing, because Cosmic Church more or less drowns the listener in a slew of bright, melodic chords configured into stern patterns that resonate in much the same way the earlier records of a Borknagar might, circa something like The Olden Domain. DNA is also shared with a lot of his Finnish peers, from Blood Red Fog to Sargeist, in their mutual ability to inhabit the raw savagery or roots black metal with extra layers of weeping texture and melancholic phrasing. But beyond that, I was often taken aback here by the changing up of riff patterns that kept the 30+ minutes of content compelling...from the ability to step back for a simpler, meaty melodic palm driven pattern (intro to "Vigilia II") to the myriad unexpected lead melodies that crop up where many other bands might just bore to death with incessant onslaughts of predictable chords. The album also has a swooning, swerving bass presence which doesn't always stand out but creates a robust support for the rhythm guitar, creating a depth and subliminal groove alongside their drive and desperation.

The drums are also pretty functional, though on occasion some of the double bass beats and crashes can feel either hollow or hissy where they exist on their own sub-level to the riffs. Synth sounds are very tastefully delegated to the backdrop, so you always feel like you're coming up through some dewy valley at sunrise, but they're never quite in your face or obscuring the tremolo picked guitars or clanging, semi-dissonant chords. The vocals definitely come from the raving, painful rasp tradition that bands like Burzum once kicked off, and they're not unlike what you've experienced on some of Horna's more melodic material, but they fit the rustic surges and passionate atmosphere like a glove, and Vigilia ultimately comes across as both fell and majestic in even quantities. Having had only a minimum of exposure to the earlier records, I was pretty impressed with just how easily my psyche was able to plug into this music and escape into Luxixul's universe, even if I can't understand a word of the lyrics. A reliable companion for the ranging of meadow, mountain and wood.