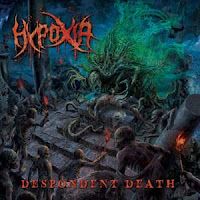 It would be a stretch to dub New York's Hypoxia as an 'original' voice within death metal, but I did find their balance of late 80s evil tremolo picking and momentum, clad in the brutality and viscera of its 90s offspring, to be refreshing. Call me jaded, but when the lion's share of new albums and promos I receive sound so driven to emulate one particular scene or band, it's nice that something comes along which is instead intent on bridging several strains into a cohesive whole, an accomplishment Despondent Death can post up on its wall like one of those certificates you always see at a local business. This debut also bears the distinction of being 'retro' in nature but not insultingly so...Hypoxia does not wish to sound like a creepy uncle channeling the death metal of a Roadrunner/Earache-dominant epoch, that's merely a fortunate side effect.

Essentially this is what might have occurred if Golden Age Death (Scream Bloody Gore, Leprosy) had been spending enough time at the gym that it could pass for vintage Suffocation (Human Waste, Effigies of the Forgotten) or the first Immolation full-length Dawn of Possession. Lots of Morbid Angel in there too, specifically Blessed and Covenant. Blazing, eerie tremolo picked guitars adorned with charging, simpler drum lines which can very easily apply the more intense techniques of blasting and ceaseless double-bass when appropriate. Add to that a lot of nice, throwback lead sequences which thrill and terrify the senses like a freshly-opened tomb, and an enormously fat bottom-feeder bass tone, and you've got a pretty wild ride for anyone who remembers that 80s-90s transition of the genre, or really, anyone who wished they did. Mike Hrubovcak churns in a vocal performance not entirely unlike what you've heard him perform with Vile or Divine Rapture, only the primacy of the material hear really lets his tear his throat open to create a more carnal, ghoulish presence that never smothers the riffing whilst it entertains. There are additionally some higher pitched barks and growls in there, which create an effect not unlike what Glen Benton would have sounded like if you split his raving personalities in two instead of layering them simultaneously.

Composition-wise, it's nothing new, and nothing all that special, but where Despondent Death thrives is in its ability to make the listener forget that fact while immersed in its undead stench. You sincerely feel like it's 1993 again. You've just spun Onward to Golgotha and Iniquitous and you're reaching for the next tape (or CD, if you were lucky) on your rack. This Hypoxia full-length might damn well have been that next tape, a 'second stringer' that would have fully satisfied your cravings even if it wasn't about to blow up the medium. Derivative, because few other death metal bands of today have any other choice, but not derivative in a derogatory or debilitative sense, because it sounds to me like a bunch of guys who experienced the tectonic shift of extremity getting back in touch with their roots without having to jerk them from the soil. Just plugging right into that morbid chronology and finding themselves again. If you were a fan of Suffocation, Immolation, Gorguts or Malevolent Creation BEFORE their respective metamorphoses into increasingly technical, brutal or unusual entities, and you ever dreamed of Dan SeaGrave skylines, or Jeffrey Coombs sticking you with a glowing syringe, then your fix is in.