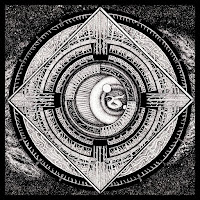 If you've read my review of the three-way conceptual split album Moerae, released this past Spring, then you'll know I already feel confident about the enigmatic Greeks known as simple Awe, who might or might not have anything to do with other spectacular bands from the Athens area. Through Providentia, they engage us in their own triptych of tunes which experiment within the black metal medium, not to the extent that it becomes unrecognizable as such, but a more immersive, fleshed out experience in which contrasts of intensity and minimalism are waged across 50+ minutes of richly and clearly produced isolation and contempt.

To an extent, the tracks here might be compared to French acts like Blut Aus Nord or Deathspell Omega in how they champion abstraction and dissonance through note selection, generating both restlessness and discomfiture, but lacking the post-industrial aesthetics of the former's modern recordings, and the all-out assault on the senses created through the latter's Paracletus. Awe conspires to create these lengthy landscapes of shifting note textures, rapid but gently curving bass lines and other hallmarks of variation, bound together by a forceful, sustained, guttural vocal presence which emits a radiant nihilism alongside the more complex guitar patterns. There is much consistency with the faster sequences, at least in the sandbox of their note selection, but there is almost always some new disturbance occupying the earspace which keeps the material compelling throughout.

Granted, this is the antithesis of consonant riffing, so if you take issue with your black metal being beholden through an unnerving, almost Voivod-ish lens, then it's not about to change your mind. Even where the guitars shift out briefly to a cleaner tone, like in "Actus Purus", they still enforce the trepidatious, haunted vibe of the album. But oftentimes, records like this also strive for obliqueness in the production...not so for Providentia, which is as clear as day, converting each of those aggravating, dissonant guitar lines into an effusion of paranoid sunlight to warp your psyche. The drumming and guitar tone are pro and polished, the tortured flaws and intricacies of the guttural fully exposed to the elements, and yet it comes across just as insidious as some basement tape. The lyrics are also quite good, Biblical and visceral, Dante and Milton striking their best Abbath and Demonaz poses. Awe prove yet another worthwhile voice in the inexhaustible Hellenic ranks. A voice of insanity, perhaps, but everyone needs a hobby.