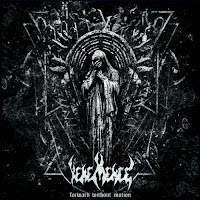 If there is one thing I can say unflinchingly in Forward Without Motion's favor, it absolutely sounds like a collection of riffs that spanned about a decade of planning. If the music on this record had been released soon after God Was Created in 2002, I feel as if the Arizona outfit might have catapulted upon the buzz of that album to the level that peers like The Black Dahlia Murder have achieved via their intense permutations of the Swedish melodic death metal style, because there are just loads of guitars here which would have thrilled that same audience for the time. Vehemence does not sound so insipidly driven to emulate any of the same bands, and never really has, which is why the band once cultivated so much praise as a genuine evolution of the medium. Now, with the vast selection of melodies on this new album, I would say that there is indeed some influence per At the Gates, Dark Tranquillity, and so forth, but it's always tasteful and always embellished with some of the band's own personality. But I can't help but feel the title the band chose here is a little tongue-in-cheek...or at the very least, dead accurate.

Going off the guitars alone, there is so much on offer here that you could fill a half-dozen lower tier melodeath discs circa Sweden in the late 90s or early Oughts. Vibrant, glorious melodies springing in near endless succession, often with the density of an early Insomnium. Leads are well plotted and always seem to emotionally capitalize on the sequences leading up to them, and with the exception of a few driving, predictable chord patterns across the nine tunes, I don't think there's any argument to be made that this aspect of the album wasn't the product of great effort. That being said, there was just something about the drumming, the vocals, and the mix of Forward Without Motion that turned me off immediately. The bludgeoning and splashing of the kick and snare drum seem a little too overt and distracting, so when I found my imagination glued to one of the melodies the percussion served only to sever that adhesive bond. The vocals were never really a strong point for Vehemence, since they just lack an original or broad enough guttural charisma to give a proper 'beauty and the beast' balance to those licks. Combined with the drumming, the entire package feels murky and cluttered and somehow unpolished to the level that so many albums of this style seem to thrive on.

And that might not be such a bad thing if the chemistry and effort put into the guitars didn't sound as if it deserved so much more...which they really do. Not all of the riffs are melancholic or sugary or catchy enough to really stand on their own, but they clearly expose a pair of guitarists who have their fingers on the pulse of what has always made this melodic death metal stepchild so distinct from its more visceral sire. It's just a shame that the sum of the disc doesn't come together to highlight them, since they are the beating heart of this material and its one shot at salvation. Granted, if you're an addict for more aggressive/brutal melodic death metal like Japan's Intestine Baalism, or you swear by a lot of those bands that broke in the early 21st century like TBDM or Beyond the Embrace, or you were a die hard for the first three Vehemence records, then I think you're at least going to be impressed by the painstaking effort that went into a chunk of this material. Not a bad comeback by any means. A few miles above their lackluster Helping the World to See, which was their previous swan song with Metal Blade Records, but certain components just have so much more staying power than others here, that it created an incongruous (if consistent) experience, from the production to the lyrics ("She Fucks Like She's Alive" seems somewhat out of place), that put me off.