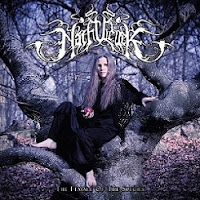 The Female of the Species comes across as quite professional for a solo act, both in the production values and the musical proficiency of its creative occupant, Dagny Susanne, who has been at this for a number of years now but just never seemed to cross my desk. With a signing to the eclectic I, Voidhanger, she's likely to not only reach out to a broader base of listeners, but also provide the label with a truly Nordic sounding, traditional black metal artisan who channels a number of the Norse and Swedish pioneers into a cohesive whole. Aesthetically, the rhythm guitar patterns feel as if they're bound to the Sagas, the naturalistic surroundings, and perhaps even a bit of a pulp sword & sorcery, though the music is not all that adventurous.

I guess I'd describe it as a brand of choppy black metal redolent of old Enslaved or Immortal, but slightly less intense and overwhelming...the complexity hovers somewhere between records like Vikingligr veldi or Battles in the North and the late 80s output of Bathory. Fast and forceful in some aspects, but not afraid to slow down for some deceptively simple chord patterns that are the setup for a melodic burst of intensity (as in "Fatale"). She'll often imbue the basic riffs with these harmonized tremolo melodies that patter off into the distance, but cuts like "Cimmerian Child" just feel like the primal savagery of a Blood, Fire, Death, or belligerent Barathrum, recast in a contemporary studio mold so the guitars are really potent and loud. On the downside, a lot of the rhythm guitars just aren't that interesting in scope, and without that added layer of melodic texture, some might be pretty dull, but Dagny has the sense to provide that, and the material feels fuller, balanced, and has just the right tinge of dissonance and darkness to it that it pulls you right under.

Vocally she adopts a growl reminiscent of a more strained Quorthon, or perhaps Abbath is a better comparison on the more recent material by Immortal or I. Visceral and sustained, gravelly and constipated. The bass lines don't often deter from the guitar chords, and there was plenty of space for a little variation. Drumming is tight and functional but this isn't exactly an album which yearns for record speed intensity or endless walls of double bass and blasting into exhaustion. Overall, it all sounds loud and streamlined and effective for those who like the modern records by the Scandinavian veterans, and I think that's definitely the crowd that is most likely to appreciate what Dagny has put together here. Not exactly unique, and not consistently memorable throughout the duration, but there is obviously a competence and effort here which result in a workmanlike sophomore album.