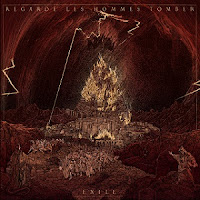 Blackened sludge metal is hardly a novelty by now, but what I will say for Regarde Les Hommes Tomber (named for a French film) is that they've captured the hybrid just as professionally as any other band, by which I mean the production on this sophomore effort is truly outstanding. Enough that I'd recommend you listen to it for that alone, it's just so well balanced. Thick and juicy bass lines tunnel beneath a landslide of mid-paced driving chords and eerier note patterns while the front man alternates between the angst-ridden barked vocals common to the medium, and some deeper gutturals and snarls which feel more maddening and decrepit.

Drums splash and thunder with a mixture of tribal intensity and upbeat outbursts above which the rhythm guitars transform themselves into more post-black/shoegaze patterns, only to alleviate back to the predicted angry Neurosis crawl. There is also a real sense of 'lows and highs' created by the contrast of giving us a few peaceful seconds to recoup and then just laying into us with these melancholic floods of notation which capture that layered emotional effect this niche of metal music is so known for. Nothing being performed is necessarily complex, the band isn't attempting to rival Mastodon or even incorporate the grooving textures of a Gojira...they thrive solely on those 3-4 note or chord patterns while letting the sum momentum of the material force its way into you and then over you, and you'll feel the walls shake to those beats while your neighbors flee from the torture in the front man's inflection.

Sound-wise, Exile absolutely nails it, but where I felt the tunes were slightly lacking is in the department of individually memorable licks. They all serve the band's bludgeoning aesthetic well enough, with hints of mystique and post-industrial annihilation, but few of them had me crawling over myself to continuously replay the album, and there was in fact a sense of sameness to the entire proceedings, even though Regarde Les Hommes Tomber do their damnedest to provide some variation amid the calms and turbulence. But there are certainly some riffs here which are vastly less interesting than a few others, and I constantly felt like just one more note progression out of left field here or there really would have rounded this all off. Regardless, Exile is a competent work which would be easy enough to recommend to fans of this style from both sides of the Atlantic, whether your poison is Isis, Neurosis, Cult of Luna, or even stuff like Tombs and Castevet.