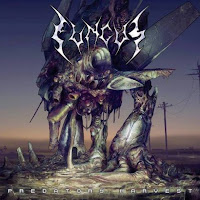 The more death metal splits into its paradigms of old school nostalgia, cavernous atmosphere and tech brutality, the more I find myself drifting towards albums somewhere in the middle, which can cover a lot of the bases inherently and just commit to the actual process of songwriting. Fungus, a largely Portuguese act with one foreign member, tends to dwell within that range... You could make an argument that they veer slightly more towards the more technical side of things, but Predatory Harvest also features a widespread use of riffing constructions that remind me a lot of USDM, Deicide and Morbid Angel as they were emergent through the early 90s. There is nothing here on their full-length debut which you haven't already been exposed to hundreds if not thousands of times, but the level of competence and execution is such that it fits the bill when you're just in the mood for an explosion of turn-of-the-millennium death metal performed with a modicum of potency and proficiency.

A lot of stop/start blast-work here which supports tremolo picked patterns and evil bass lines that themselves occasionally remind me of note patterns from bands like Death back when they were fresh and creepy, but you wouldn't know it from the speed and volatility. Powder keg beats with the fuse about to be lit slathered with choppy clinical mute picking sequences redolent of anything from modern Pestilence to Cannibal Corpse. Unfortunately, a number of these often feel familiar to one another, and I was often relying on the slower or mid-paced riffs in between them to differentiate tracks. The vocalist has a straightforward, nihilistic guttural to which he applies some sustain, but it doesn't necessarily stand out in a crowd of so many others in the field. I do feel, though, that there is one department here where the band excelled beyond others, and that's just how much excitement the leads provide, soaring in like wailing death metal pteranodons and making everything else much more kinetic and memorable simply by association. They're not using anything out of the ordinary in terms of technique, but they just attribute a well roundedness to the material which would be partly nullified without them.

Lyrically Fungus deals a lot with technophobia, or just how much computers and nanotechnology will inevitably warp and twist mankind as you'll read a lot in science fiction/cyberpunk horror stories, and they often get down to the technical details of the process, which is not uncommon in death metal but also not the most frequent topic I associate with it. The studio production isn't overly polished or processed, but rather clean and straightforward enough to discern every note, grunt, bass line and individual drum. I feel the main limitation here is just that there a lot of bands and records in this niche, but if you're in the mood for stuff like Prostitute Disfigurement, Gorgasm, Suffocation, Decrepit Birth and Mortal Decay, and you'd rather have with a different logo and some new faces, then Predatory Harvest is not a bad way to satisfy that craving. Solidly executed tech death precision, with no aversion to throwing down on a simpler groove from an older era when appropriate.