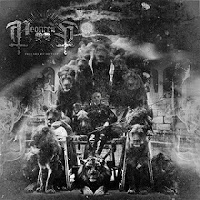 Although Moonreich could hardly be considered as eclectic and bizarre as countrymen Peste Noire, Deathspell Omega or Blut Aus Nord, there is a peculiar specificity to how they compose black metal music which goes above and beyond the predictable tropes to a more focused selection of riffs, production choices and atmospheric ingredients combined into a sum that is not quite like any other singular entity in the genre's heavily saturated canon. Truly this is a French act which puts together music and gives fuck all about an audience's predisposition. From beginning to end, their third full-length Pillars of Detest seems intent on embellishments of rhythmic versatility, contrasts of intensity and contemplation, and 'jumping' genre for death and thrash metal components whenever it suits the imagination...and never suffering for it. Having heard both their prior albums, I can say with certainty that this was the most compelling and listenable, while never cheapening itself with undue sentiment or fits of happiness.

By which I mean it's dark, but strangely accessible. Riffs can crawl through a morose landscape, as  pitch as blackest night, glinting of melodies while the drums jam along at a prog rock pace, and then the band can explode into atypical blasted rhythms in which they still manage to embed a little nuance and distinction. They can lay out an excellent chord groove ("All Born Sick") and lunge into overdrive within the span of seconds and yet the musicianship is flawless and taut. The vocals are meted out through a rich, barking rasp that performs enough syllabic deviance that it never flirts with monotony, and has just the right level of reverb and sustain to match the riffs in effectiveness. The guitar tone is excellent, both the precision of the tremolo picked notes and the atonal bliss which is always drawing the ear above the deeper fret progressions. Special credit should also be given for the bass lines, which are sultry and swerving and contribute heavily to the hazy, bleak emotional space into which this album shoved me. Moonreich is extremely well-rounded for such a jagged sound... with no ingredient out of balance or league with the remainder.

There are slight touches of ritualism and expansiveness captured through chants and percussion, but the narrative of guitar-and-drum-driven black metal is forever at the fore, and Pillars of Detest is quite simply one of the better examples of its form I've heard in 2015, especially coming from outside of Norway which has had an impressive showing from a number of its veteran acts. Sure, this is not a band which entirely delves into or benefits from the eccentricity and strangeness of many of its local peers, but for those seeking something more sanely sinister, I'd rank this easily alongside a number of overlooked gems like Spicilège or Of Entropy and Life Denial. Fans of Merrimack, Satyricon, Temple of Baal or even the recent works of Belgium's Enthroned will find it easy to submerge themselves into this meticulous monstrosity, and not escape without leaving a trail of tar.