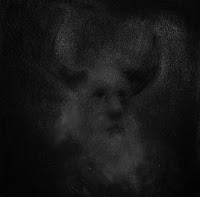 It's a testament to Maïeutiste's ingenuity that across the 76 minutes of their eponymous debut, ridden with stylistic variation, the French act still manages to convey an effective experience which eschews the safety parameters of its constituent genres to manifest whatever it so pleases. There's a certain amount of creative dissonance and emotional disparity at play, especially when leaping between cuts of such different vision as the atmospheric doom of "Introductions..." and the ensuing bursts of melodic black metal dubbed "...In the Mirror...", but what patches all the bands' ideas into a coherent quilt is the constant focus on surprising, memorable hooks that are strung along with just enough frequency that the audience's attention will snap back from any precipice of disconnection.

Granted, for some listeners, the wealth of aesthetics here might prove too scattershot and unfocused to really immerse oneself. The slower, drearier sequences create an obvious contrast against the faster, blast beat-driven segments, but beyond that the black and doom tags are threaded liberally with elements of thrashing or melodic death metal licks. There are ambient-honed interludes using double bass strings and deeper chants ("Purgatoire"). Saxophone. Anything that sticks. Moody jazz progressions are interlaced with explosions of metallic aggression ("Absolution"). And it never feels as if it's cheap, as if the band is writing 'different' for different's sake, because so much of the actual composition is well-comported, intelligent and interesting. When they're scathing along a pure black metal axis it captures a lot of that mid to late 90s vibe when the Scandinavians were evolving their individual sounds to incorporate more progressive inclinations and complex melodic textures, but that is by no means the defining 'sound' to this album, just one of many weapons on exhibit.

Even the vocals are all over the place, for better or worse. Stock black rasps and deeper gutturals are juxtaposed with soaring, folksy male cleans and whispers, and while individually these don't feel too distinct in the wake of the many other bands that have used them all, it almost seems necessary to match up with the versatile palette of instrumentation. There is a risk here that Maïeutiste would collapse under the weight of so much eclecticism, especially when you consider the sheer length of the debut, but this is staved off by the general quality of the individual riffs and the overt amount of effort they must have expended putting it all together. Overly ambitious? Over extended? Perhaps, to some orthodox  extreme metal listeners who prefer everything wrapped tidily into their chosen lifestyle package with a bow on top; but I can't help but feel admiration for how these Frenchmen conduct themselves and their orchestra of kinetic woe. There are awkward if not jarring transitions, and some licks fall slightly behind others in overall impact, but the album is just so substantial and cleanly produced that it's worth checking out by fans of  Ne Obliviscaris, Cormorant, Enslaved, Opeth and Vintersorg-era Borknagar.