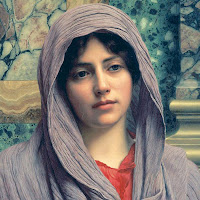 Having already proven fluency in both the black metal and ambient spectra time and time again, Spectral Lore has sought to broaden its horizons even further with a series of even more experimental departures from the structured soothing and savagery. These have taken the form of what amount to full-length EPs that each channel a specific aesthetic skill set. With Voyager, Ayloss delved into a more purely electronic/ambient ritual, a science fictional aesthetic both pulsing and sparse. Now, with Gnosis, he has concocted what is nearly an antithesis to that effort, by tripping the rifts of antiquity with metallic guitar rhythms, busier bass lines and a meditative style of composition which creates a landscape of ancient Hellenic and Oriental callbacks, a marriage of moods and exoticism.

Of these two diversional EPs (thus far), this is of course closer to the Spectral Lore you have made previous acquaintance with, at least in instrumentation. But the spaciousness and simplicity of the guitars, drifting and dreamlike, generally inhabit a more atmospheric, background realm on the earlier half of the track list, than the raging tremolo picked excellence and aggression I associate with records like his excellent Sentinel. That DOES play its part, threaded through the odd and extensive "A God Made of Flesh and Consciousness" along with the heavier drumming, but it's not the rule of thumb early on. There are points of pure folkish writing with a psychedelic bent ("Averroes' Search"), clean guitars and looser percussion instruments, and even a minimalist ambient backdrop to such strings on the closer "For Aleppo", which is nearly 10 minutes with the same synth wave struck in the background, enough that you might be driven mad if not for the classical licks being sporadically brushes across the monotony. Probably my favorite piece was "Gnosis' Journey Through the Ages", with some really great melodic hooks and a sense of urgency and majesty that isn't prevalent in some of the other tracks.

Overall, though, Gnosis really functioned as intended, as a support for the listener's contemplation, and is best experienced either through stillness or some other activity in which the motor skills will veer one way, and the imagination the other. It was a curious choice made to keep what vocals you can perceive as sparse rasps buried in the mix...the lyrics themselves are fairly substantial, but it's as if the audience is presented with some existential test to apply them to the songs him or herself. They certainly sound sick when "A God Made..." escalates into a primal explosion, and in that specific spot it might have benefited to crank them up, but it's the clear intent that they never dominate the instruments, and rarely participate, so their exile from the foreground is understandable. Now, having a predilection for spacey electronics and synthesizers myself, from Tron to Tangerine Dream to Mass Effect, I'd have to say that I was more absorbed by the previous EP, but Gnosis was still a compelling excursion to tide us over until the next 'proper' full-length, a welcome contradiction of an experiment achieved through somewhat traditional riffs both acoustic and electric.