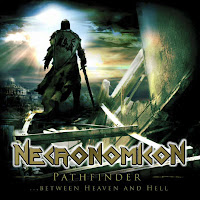 Pathfinder...Between Heaven and Hell is the eight album in a 30+ year career by a band that has hardly broken out beyond a small audience of die hard Teutonic thrashers, but while you might look at that as some proof of failure, it's also proof of consistency and sincerity. Necronomicon is not in this game to make friends and brown-nose trends, the differences between the material they make now and what they were putting out in 1986 are largely through minor aesthetic shifts, professionalism in production details, and all around seasoning. Where the band was never really a stranger to incorporating speed, heavy and power metal elements into their proper thrashing, this effort is probably where that practice becomes most evident, and I'd be lying if I claimed that it didn't strengthen the overall product.

Now, the band has always more or less stood in the shadows of the far better known Destruction, and this is due primarily to the similarity in vocal styles, that nasty, pinched, slightly melodic rasp that the magnificent Schmier used (and still uses) to convert the world. That timbre is certainly retained to top off this  new material, with Volker 'Freddy' Fredrich remaining in place as the sole original member, but when it gets to the riffing I noticed a lot more semblance to other bands. You've got fast picked speed metal licks, and a lot of strong solid chords which honestly reminded me more of how groups like Accept, U.D.O. and Primal Fear put together songs, only with the clear differences in vocals. Perhaps a more direct comparison could be drawn to Schmier's other bands like Headhunter or his recent heavy metal 'supergroup' Panzer, since they show tendencies to more traditional metal than his mainstay. Truly, Pathfinder is more of this than it is pure thrashing, and thus you're getting a lot of solid, moody hooks and chord selections in cuts like "Reborn" which are pretty good; Freddy's voice wavers and cuts through the meatier rhythms with a nice, clinical slice.

Big drums, thick bass that doesn't veer too much from the rhythm lines, and plenty of variation round out a substantial record upon which quite a number of tunes go well past 6-7 minutes and don't fill out their bulk with boredom. Not all the riffs are winners, and few of them will feel unfamiliar if you've been listening to these styles the last 30-40 years, but it's evident that a great deal of care and craft went into each, and so the 70 minutes of content is consistently robust if not exceedingly catchy. Fans of classic bands like Iron Maiden will discover rather obvious homages, as in "Alone in the Dark", and I actually heard a lot of similarities to some of the grimier tunes by the late X-Wild, especially with that mesh of harsher, rasping vocals with the consonant, melodic power metal rhythm guitars. But a lot of this is pretty straight Priest/Accept worship with the occasional lapse back into thrashier territory, and even though I wouldn't say that they constantly mete out the most memorable phrases, respect has to be given that so late in their career they'd take some of the edge off, or at least invest in a different brand of razor to write something so measured, fluent and mature. Enjoyed this more than their prior album Invictus, and right around the same level as their 2008 full-length Revenge of the Beast.