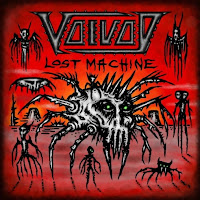 Lost Machine was recorded on the same tour that I last caught Voivod on, so the set looks mighty familiar, and that's a good thing, because I had a blast at that gig, and thanked several of them afterwards. Not the same DATE, of course, as I live in New England, but with this Quebec City recording, I feel like I can relive it all over again, and what's more, they sound excellent. The Canadians have put out a number of lives in the past, with the low point being Voivod Lives in 2000, and high water mark to Warriors of Ice in 2011, but it's safe to say this sounds almost the measure of the latter, with a great track list spanning a lot of their albums...not ALL of them, because you're not going to begin to cover 15 albums with 13 tracks, but let's just say there's a variety here that made the set an entertaining aural roller coaster.

"Post Society" starts out strong, setting the benchmark for how clean this is going to sound. They've always been a band that excelled with the single guitarist, because the rhythm section is so interesting that there's always plenty to captivate you, and Chewy's tone here is fucking phenomenal. His rhythms might sound a little thin, but they're so clean and perfectly played, and his leads are wild. The bass also sounds awesome, and Away's drumming is as proggy and energetically balanced as in the studio. Snake is also on point, an entertaining frontman to experience, and that wastoid punkish quality to his voice sounds like he hasn't aged a day since the 80s. They rifle through new excellence like "Obsolete Beings", "The End of Dormancy", "Iconspiracy" and "Fall" as they were classics, rubbing up against fan favorites like "Psychic Vacuum" and their "Astronomy Domine" cover, but also took me by surprise with "The Prow" from Angel Rat, which I remember being stoked to see in person.  They also do the titular "The Lost Machine" off The Outer Limits, duh, which is also had an unusually potent presence on stage with their odd sci-fi projections playing out on the screen behind them.

Lost Machine: Live is an awesome presentation of the band, and no matter what track selection they had come up with, provided it wasn't all from Negatron, the quality would have probably been the same. Yes, I am biased, this is my favorite group in the universe and they can do no wrong (not even Negatron was that wrong), but it's another cool live album that maintains peak professionalism while never lacking the vibrancy and creativity that has always driven them. Mandatory for fans and collectors, and still well worth a listen for everyone else too.