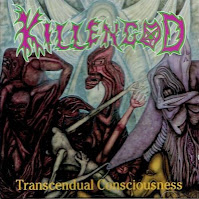 With all the love foisted upon obscure death metal of the 80s and 90s, down to the demo level, it's hard to believe that this Australian band, Killengod, goes unnoticed. Sure, the cover art is hideous, the name of the band is a bit dumb, but the production and songs on this 1995 debut, Transcendual Consciousness (whatever that means) are tight enough that I can imagine those into a more semi-brutal acts of that time period like Malevolent Creation or Deicide would get a kick out of this. Come to think of it, the name actually seems to me like a lazy alternative to Deicide, and the band has a lot of stylistic comparisons with Benton and company. I'll even go further to say that the production job on this CD is even better than half of what Scott Burns was putting out, so there it is.

This is equal parts fast brutality and groove-based death metal which is heavily rooted in the Florida style, with perhaps a sliver of sensibility towards bands like Biohazard when they go into a breakdown, though this wasn't a foreign technique to death metal itself either. The riffs chug along in engaging if forgettable patterns, and they aren't afraid to throw some weirdness over the top like flange ("Soul Mutilation"). They use a dual vocal, the most apt comparison to Deicide, with the snarl and guttural going off in constant unison, and it sounds pretty nasty and silly at the same time, but I doubt the latter was the intent. The drums are damn solid, with steady double kick, fun fills and some blasting, though never so much that it becomes monotonous, and they also seem to stick with the guttural in those parts and it sounds fairly awesome. Like their Floridian forebears Deicide and Cannibal Corpse, there is definitely also a bit of a thrash influence here which directly translates into some of the riffing, but much of it meat-fisted and brutal death metal, but lacking the overt complexity some of the bands were starting to branch into.

The lead aren't great, but they add a nice dimension of messiness over the thrust of the low end, and the bass is warbling all over the place. The band actually did their best to vary this one up, they'll have a clean acoustic part here or some rhythmic shifts that sound like nothing else on the album as in "Experimental Evidence", which sounds more like a brute thrash tune via Sacred Reich or Demolition Hammer. The title track also steps off into the Twilight Zone with a weird mix of groove, thick bass lines, chugging build-ups and a cool, weird ambient intro which sounds like water running, bells being rung and some warped samples of alien pleasure. Transcendual Consciousness deserves far more credit than I'd give it just by first impressions, for such an unknown record it sounds quite competent, and the songs are frenetic and fun, especially for a time when the chugging and grooves were still in vogue. If you enjoy that period of death metal when Suffocation, Cryptopsy and the aforementioned Florida acts were fast becoming gods, you could do much worse than check this one out if you can find it.

Posted by autothrall at 9:30 PM