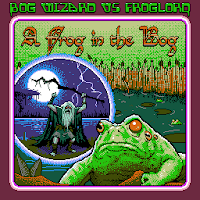 Can we start with how awesome the cover art for this split release is? I'm getting total vibes of primitive PC graphics, and by primitive I mean the PEAK. If we saw something like this on a Commodore 64 game's title screen, my bros and I might have creamed our collective corduroys. No surprise then that it is another tripped out recording from Michigan's psychedelic sledgehammer Bog Wizard, this time paired out with the equally outrageous Froglord out of England. There is no scenario in which the two of these groups collide and dungeon level mischief does NOT ensue, so make sure up front that you've run some clean bong water, written your wills, put on your space helmets and whatever random pieces of armor you can sling together to defend yourself from the trudging, sludging and drudging you are about to receive.

Bog Wizard's portion of the split definitely feels in the same wheelhouse as their recent Miasmic Purple Smoke album, that is to say a steady, slow, crush of distorted swill playing out thick, oozing, repetitive grooves that will devolve you into your respective reptilian or amphibious DNA. The vocal tracks are delivered with a barbaric hypnotism, but the band also breaks the heaviness down into some simple bass lines and percussion here. Froglord's contributions, "The Bog" and "The Wizard", both references to their partners in crime (much as "Reptilian Death Squad" did for them), are slightly more robust, accessible stoner metal jams with great tones, and a cool vocal that sounds like Rob Zombie got punched square in the gut, but gets a little more hoarse when they get to a chorus part. To be honest, both sides of this equation do complement each other well, they're both well within that wheelhouse of savage, simple doom and sludge that was undoubtedly inspired by Robert E. Howard's Conan fiction and dangerous degrees of hashish consumption. The Brits go for a brighter tone whereas Bog Wizard sounds more dreary, raw and repressed by design.

What's even cooler, is that in addition to how their individual contributions celebrate one another, there are two directly collaborative tracks named for one another, and these are some of its funnest moments, with the "The Frog Lord" mantra being repeated against some sizzling synth effects, and the aforementioned vocals attacking you from all angles as the tripping turns paranoiac. "The Bog Wizard" sounds like Clutch on a bad bender after listening to some Conan or Buzz*oven records, and it's just kind of cool to see a split recording taken this far...in general, the bands can remain a bit disparate and then the whole experience feels forced, but here it's all quite balanced. The songs are all really simple, and I wouldn't mind either band getting a little more riffy, complex or experimental for some added depth, but it seems like a good time was had by all, and if you're a fan of their individual records, then there is no reason to skip this one.

Posted by autothrall at 2:32 PM