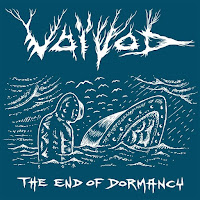 Even as a Voivod devotee, the contents of The End of Dormancy EP are a hard sell, because there's just not a lot to it, but the idea is at least fun. Take the title track and then spice it up with a horn section. It works, it works really damn well, the saxes and so forth honking and squealing along to the already-weird, progressive taxonomy of the composition. At the same time, it does seem like you could just cut and paste them in there, they don't really feel like naturally parts of the tune, and so I'm relieved they stick to one track. The Wake certainly had its experimental side, the band playing with new ideas like some brief orchestration, and so this one isn't at all a stretch, but it definitely can come across like some guys just playing along to a previous recording...however, I will say that when the song goes into that weird, lurching segue near the end, where it feels like a ship lurching back and forth, the brass does give a Circus-like that was quite cool and even felt like a Mr. Bungle tune.

The 'B' sides are two live tracks, from the Montreal Jazz Fest of 2019, and the song actually shines more in that capacity, with a little variation from the studio incarnation. A great live mix doesn't hurt, but in this context it feels like a more naturally a pairing, along with the passionate vocals and performance of the core metal instruments. They also include a live of "The Unknown Knows" from that same date, but it doesn't seem to include the same instruments...sort of a misstep, though it's cool to think a crowd of jazz lovers would want to hear one of Voivod's more funky, weird tunes in the buff. So this is a quirky little collectors' item, which at least sounds good, but I almost wish the experiment would go a little further, maybe an album's length, with an EP of songs having the brazen jazzy sounds mixed more organically into the recording, and then more live tunes also integrating them. Having said that, if this is all we get, I'm fine with that. Failure is not within the Voivod lexicon, and they're not have bad sounding with the saxes and such. Just don't do a hip hop remix record, please.

Posted by autothrall at 3:41 PM