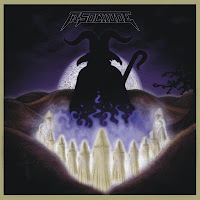 I'm not going to repeat what others have said too much, the obvious...In Solitude is another of a batch of bands, many Swedish, who came along with a sound heavily reminiscent of the old Danish masters Mercyful Fate. They aren't the most egregious example of such, and you could tell from the debut that the group had some different ideas, but that's really the wheelhouse in which they're toiling. The band uses the Fate toolbox, but not its limitations, and in fact I think its this band's solitude which is a little more of a doppelganger for that sound. Fortunately, unlike a few of their peers, this band put together a pretty damn well composed album which could stand on its own outside the shadow of its influence, and In Solitude has a clean, efficient production that isn't a far cry from what their countrymen in Ghost would attempt with their simpler and more accessible debut Opus Enonymous.

There is a bit of the falsetto shrieking you might expect, but vocalist Pelle spends more time in a sort of soaring, mid-range which emulates a little of the creepy King patterns, but also carries inflections of a lot of other epic/heavy metal bands. The riffs, too, seem drawn from a wider array of classic metal bands, with even a measure of 70s inspiration drawing me back to Rainbow or early Priest. In a few places I even caught a hint of Candlemass. Maybe I'm crazy. Once it gets a little harder and meaner, you do get some vibes from albums like Don't Break the Oath, Abigail, or Them, with the darker rhythm patterns and breakout leads not unlike Andy, but it's never so annoying that it feels like outright theft. They definitely excel at tacking into that horror/haunting vibe, and the record is consistently hammering along, they don't stop a lot for interludes or thematics, it's the straight metal dope or bust. "Witches Sabbath", "7th Ghost", "Kathedral" and "Temple of the Unknown" are favorites here, but it's actually quite consistent across all 36 minutes.

Where it does lack a little in having individual riffs that are blazing and immortal, or vocals lines with a real hook. The tunes flow well together and which one another, but oftentimes I'll be listening through this and just expecting some money shot lick to come flying at me, only to end up a little underwhelmed. The leads are good, but don't really reach that explosive next level that I love in metal music. But all in all, In Solitude is a very seasoned and solidly composed record, especially for a debut, and its just busy enough that you get a hint of promise that it might prove prescient of some greater evolution in the future, taking the influences somewhere different. And boy would they ever do that a half-decade later, but maybe not in the way I would have expected.