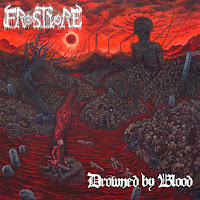 We've heard the influence of Swedish death metal worldwide in the past, particularly in the German, Finnish, and North American scenes, but I cannot recall having heard Japan take a spin on it 'til Tokyo's Frostvore. The hope here is the regional differences will take the popular guitar tone of this niche and come up with something interesting in turn, and while I don't know that that is 100% the case with this debut album, it's definitely not the most blatantly unoriginal use of the aesthetics. The cover art is strange and creepy, with that blood-limned celestial body spreading a sanguine gloom over the smokestacks and corpse-piled landscape, gore and gravestones and even what looks like a skeletal titan chained to the sky in the distance, and various maws and eyes emerging from the heaps of bodies. Unnerving, with eye catching color.

Is the music as great as the cover? Hardly, but it's got a hustle to it that reminds me of other bands in the Swedish throwback style I've enjoyed like Bastard Priest or LIK. The idea is to take those formative, early Nihilist and Entombed releases, make them a little more raw, almost punkish within the d-beat fold, though more in the drum-beats, as their riffs are a little choppier thank your Discharge derivatives. Apply a bunch of strong, forceful melodies and some slower, roiling classic death metal riffs in the vein of old Chuck's debut, and you've got something which should appeal to devotees of this death denomination. I like the guitar sound, as familiar as it is, but it's a bit thinner and more atmospheric than some comparable bands, and the lower, chugging guitars sequences in spots like the intro to "Extreme Cold Torture" or the breakdown of the title track sound devastating. It's also very even, the melodies are just as corpulent as the rhythm guitars, rather than just being these weaker threads woven though the churning substrate. The drums and bass don't quite dazzle me, they do their job, but it's the guitars and the moments where they do branch into their own thing (the epic bridge of the title track) that really impress the most.

Vocally, it's definitely got a hoarse, abusive style similar to L-G Petrov, but maybe more energized and raunchy and with a little less of the phrasing and character. It's fully hostile and fits really well to the apocalyptic thrust of the tunes. The band also gets some credit for variation, they definitely try to swap tempos and moods with the bleeding, faster pieces offset by a slow, dark chugger like "Eroded Mind", and thus it's a well-considered debut. As someone who does often grow exhausted with this style, I admit that lately it hasn't been quite so saturated, so Drowned by Blood was fairly enjoyable, not exactly a unique progression to the Swedish niche, but balanced and checking off a lot of the boxes of what we so enjoy about those old records in the early 90s. If that's your thing then this one is worth hearing.

Posted by autothrall at 7:28 PM