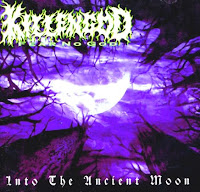 Killengod's obscure sophomore album comes across quite different up front. Gone are the weird, surreal alien things from the debut's cover, and this in fact looks as if it would be more of a black metal album, or at least it would if the logo weren't the same. Actually, when I was listening to the synth intro "Ode to an Ancient Moon", I was fully expecting them to erupt with blasting, snarls and tremolo picked melodies. After all, the first record was a bit trendy with what extreme metal was happening in 1995, so why not the 1998 album too? But this turns out not to be the case, because where the aesthetics and production of Into the Ancient Moon might differ from the debut, it's still very much brutal death metal with a Floridian foundation, only I feel a bit more of that New York intensity creeping into it here.

You still get the Deicide-like split vocals, alternating between the guttural and snarl, and they do it with a lot of character, and occasionally in tandem. The riffs, though, are far more ambitious, dabbling in more technical, varied patterns which are a smattering of thrash and brutal death, and shifting around enough with the drums that it occasionally sounds a little cluttered, with walls of riffs crashing into each other. There is a lot more technique, little pinches and melodies abound, and they also use a little more synth which recalls some of the early Nocturnus. The instruments all sounds fairly good for something at this budget, but the guitars are a bit sharper and more cutting than on the first album. There are also a few spurts of more melodic, simple riffing almost like a crude melodeath, as in the bridge of "Masquerade the Masters", but it's not enough to distract from the more abusive, intense battery they usually engage with.

Tunes like "Lord of Whores" should still sate fans of the first two Deicide records, or maybe None So Vile, and I found there were a fun, bouncy, primal grooves, although in terms of chord or note selection, this album doesn't really stand out so much. But it's competent, punishing Down Under death metal that will probably surprise those hunting deep through the underground for some competence, and their willingness to make the small aesthetic changes shows that they were a group keen on evolution and progression. It simply never progressed beyond this point...

Posted by autothrall at 4:14 PM