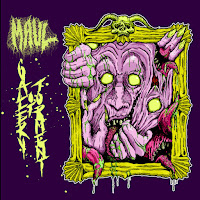 Can't recall covering a lot of metal out of North Dakota, so there's an inherent novelty to Maul which helps them stand out. I've actually been listening to them for a couple years after a friend recommended some demos, but this Gallery of Torment is a much better starting point, as it gathers together the material from both their Monarchy of Mold and Deity Demise EPs in 2020, as well as some other tracks off demos and splits. A much more substantial product to hunt down for those immersed in all the great traditional death metal radiating out of these new bands over the last decade. They don't play in a style that would be unfamiliar to you, but there's a little nuance that keeps them feeling fresh, another band that strips things to the roots, covers the basic fundamentals and then layers something else on top.

So they play a slow, plodding death metal that often borders on death/doom, but with a steady, chugging sense of groove to it. The vocals are the deep gutturals evolved out of groups like Incantation, and the almost minimalism to the riffing helps those sound broader and nastier when sustained. But as basic as the rhythm guitars and beats can get, they'll throw on these nice atmospheric melodies in places that feel naturally more impactful since they're not being spun over a more complex web. And there's already a good amount of atmosphere due to the way it's mixed, fairly raw but clear, and the aforementioned sustain to the growling. In a way, it's almost related to slam death, but moves along at a more languid pace where the grooves really settle into your conscience. There are some production peaks and valleys, since these are recordings drawn from a number of sessions, and I think the Monarchy of Mold material is likely the best sounding and brightest; some of the odds fade into the background, but I will say that it's all cut from the same cloth, with a few tunes denser and less interesting in the construction than others.

Other highlights beyond Monarchy of Mold are the two tracks from the 2018 demo Soaked in Penance, Solicit the Torture, which have a great production to the bass and guitar chugging, and some really grotesque vocals, and the "Ambiguous Lurk" single which is slightly more evil and clinical sounding; in all I'd say there are about 7-8 tracks that kill it, and then the handful of others aren't as interesting, but Gallery of Torment makes a great launch point for a proper full length album where the levels will be more balanced and the crushing concepts coherent. Maul is heavy, leaden and effective, almost like the bludgeoning weapon of their namesake methodically bashing in the skulls of a line of kneeling, bound victims in true Lucille fashion. If you only like your death metal highly progressive or technical, stay as far away as possible, but if you enjoy Asphyx, Disma and Autopsy, check them out.

Posted by autothrall at 7:29 PM