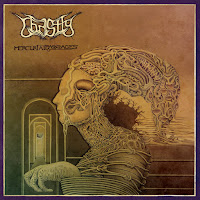 Finland's Ghastly has been thus far consistent at living up to its namesake, whether through the more ancient occult/psyche death metal stylings of the debut Carrion of Time, or its superior, spectral successor Death Velour. These guys distance themselves a lot from the traditional Finnish death metal roots, so if you're seeking more along the lines of a Demilich, Convulse or early Sentenced, you might be taken aback at how this band offers a more phantasmal, atmospheric, almost sparse on the genre. This is rarely if ever written straight to your face, but as a collection of foreboding or haunting death metal tracks that might play out in the background as you made some horrible discovery of your existence, or your lineage, or were prepping for some Lovecraftian cultist ritual.

That's not to say it doesn't get heavy and pound away in some capacity, like "Out of the Psychic Blue", but such surges are often short-lived, and it lapses back into the eerie ghost-like passages. Because of this, when the band erupt into a more straightforward tremolo picked guitar line, or when they pick up some speed, or the drums grow turbulent, it stands out all the more as a contrast, like that thing you were afraid of just surfaced as a conflict that physically threatens you. This is all glossed over by some appropriate, dissonant, airy chords, ritual melodies and of course the grisly vocals, which are delivered at a higher pitch than a lot of their Finnish forebears and their guttural muck. But I don't want to exaggerate too much...Mercurial Passages is a death metal album. If you're fond of the gloomier, cavernous fare that stemmed from old bands like Incantation, or the Paradise Lost debut, I think there's still plenty to admire, it just has a more laid back, ethereal quality to it and doesn't constantly beat on you.

I did think Death Velour was a more captivating experience, and there are some segments of this album where I find myself a little bored with the note patterns or riff choices, waiting for something more macabre or distinct to manifest in a melody or vocal line, and that happens all too rarely. The sound itself is comparable with the last, spacious and not terribly abrasive, the rhythm guitars have a slightly tinny feel to them that works with the faster melodic lines, and the leads stand out nicely against them. The cover art is once again interesting though the colors don't pop like the fantastic sophomore, and the lyrics are passable parades of images that gel with the tension and despair that the music creates. Still one of the more interesting Finnish death metal upstarts of the last few years...if you want a murkier, heavier sound or something more claustrophobic, then groups like Gorephilia, Corpsessed and Krypts have your number, but Ghastly goes along well with a group like Lantern as a more atmospheric, dimly lit adventure into morbidity.