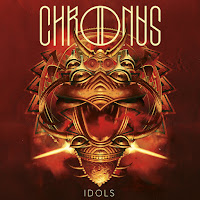 If it was criminal that the 2017 Chronus debut didn't made greater ripples on the hard rock/metal scene, it's probably even more shocking that its successor, Idols, has yet to blown up. Granted, this one rode in on a little more buzz, I heard a few more people discussing it, though sadly that was usually only in a recommendation of what you'd like if you wanted more like Ghost. And there's no harm in that, but if I'm being honest, I actually enjoy Idols as much or more than most of Papa and the Nameless Ghouls' output, and that's saying a lot, because I do like most of that band's efforts quite a lot. This sophomore is just stuffed with sweet, sticky songs that you can't shake out of your ears, driven by excellent guitar hooks and memorable vocals. It's not pop, or punk, but it metal had a 'pop punk' contingent this would clearly belong in that categorization, and I don't mean that as any sort of negative criticism, because this is awesome.

The composition and riffing power of a lot of these tunes exceeds that on the debut, often more winding and complex like the epic opener "Mountains of Madness" or "Heavy is the Crown", with some cool vocal lines that occasionally reminded me of "Golem" from Voivod's Angel Rat. There's definitely a more distinctly metallic structure to some of the rhythms here than before, and they're actually quite unique even when compared to their similar, more famous countrymen. They can also pull off a woozy Romantic rock tune like "My Heart is Longing for You", which I suppose is about as 'ballad' as they'd get here, to my relief. A few tunes don't quite fit the mold, like the short instrumental "Sun" which is a more crunchy and searing, uplifting stoner morsel, but at least the guitar tone and drums on that one sound great. It really feels like Chronus has come into their own with a pretty original sound, the bedrock of which lies in a wide range of genres from heavy metal, classic 70s and prog rock, pastoral folk and psyche, maybe a little Goth in there for good measure, it's hard to pin it down too directly but it's an attractive hybrid.

Idols also sounds outstanding in the mix, with the clear, powerful and organic rhythm guitar tones that are clean enough for all the little added melodies and flashy leads to shine through them. The tight, effective drumming and bass from the debut is carried through here, and Sebastian's vocals sound much the same, only catchier on a lot of tunes, hitting choruses that would should be instant hits were hard rock radio still some modern institution where bands like this could reach the masses. And the lyrics are generally pretty engrossing despite their simplicity. Now if this all sounds like a turnoff, and you're only interested in raw, distorted, aggressive or exceedingly melancholic metal, then I don't know if Chronus will hold much appeal for you, but if you're not opposed to a catchy record with just a hint of mystique and intelligence, absolutely give it a spin, I don't think this one has come off my rotation since I got it in 2020. Excited to hear where this can go next, though I definitely hope they keep the guitar focus and just that right balance of semi-heaviness.