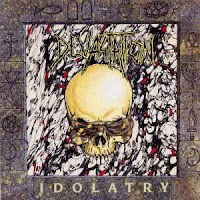 Idolatry seems to be the crowd favorite among Devastation's records, and while I think a lot of that stems from the fact that a whole lot of fresh metalheads were discovering death metal and aggressive thrash in 1991, it's a legit great follow-up to Signs of Life, exhibiting a bit more variation and some more measured, clinical thrashing. It can still go off the hinges, but not so much as its predecessor, instead there's a bit of maturity creeping in. I did not warm to this one as instantly as others, though. I've mentioned elsewhere how I actually thought '91 was a fairly average year in metal, that for my ears, there was a personal 'Curse of 91', where I find a lot of the hype albums overrated. In this case, it's not so much that, but because it was one of the Scott Burns production jobs I'm not hugely fond of. In fact, the mix here reminds me a lot of Sepultura's Arise...

I'm of course referring to that very punchy, processed guitar tone that showed up on a number of the records he worked on. It just doesn't sound great to me, in fact it often sounds a little dry. Fortunately, Devastation has the chops here to overcome that, and so it doesn't drag it down for me as much as it did Arise or some of the earlier Deicide stuff. The songs kick their fair share of ass, like Arise but with better riffs on average, and tunes like opener "Deliver the Suffering" or the amazing "Souls of Sacrifice" with those great grooves, stand among the best that the band ever released. Like the previous album, they were now a two guitar attack, and it shows with all the force of the rhythm guitars in lockstep. They were also ramping up the game with double bass and drumming that totally fit the blooming intensity that death metal was bringing to the game. I don't think the bass tone here is all that great, and of course the aforementioned guitar tone is responsible, though you can still hear it somewhat; so it's more points in its favor that it can also overcome that.

Rodney Dunsmore's vocals have also evolved yet again, not too far from Signs of Life, but here he has a roughness and sustain that remind me a lot of Ron Rinehart of Dark Angel and Jeff Becera of Possessed. But it's the songs that deliver the most here. They might not be unique or terribly nuanced, and certainly you'd already heard a lot of comparable riffs and records in the saturation of thrash that started during the late 80s and helped lead to its temporary extinction around 93-94. But it's rock-solid, mosh-ready songwriting with decent lyrics and an appreciable controlled anger to it that still resonates with me three decades later. In fact, it's just about on par with its predecessor, I think the songs are overall better, but I just like the production, artwork and nostalgia for Signs of Life a fraction more. Both need owning, and there have been a number of reissues, so they shouldn't be too hard for you to track down. Sadly this would be the end for the Texans apart from an extremely brief and fruitless reunion later.

Posted by autothrall at 7:35 PM