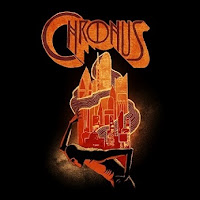 Whether you love them or hate them, one of the boons of the popularity of Sweden's Ghost is how they kind of helped open up the integration of classic pop and rock aesthetics into a largely metal-backed sound, and Chronus is a newer band, also Swedish, that is very often compared to them. I agree with this to an extent, because they perform in a very clean, accessible style of guitar-driven rock and metal that manages to inspired a similar sort of mystique. Granted, of the two albums they have released so far, the similarity is really towards Opus Eponymous, since this younger band has yet to incorporate as many synthesizers or other instruments that assist in the theatrics. They're not quite as 'pop' as their countrymen, and even their own costumes and such are toned down, coming across more like a group of Goth-tinged concierges or flight attendants or something...

Also, while there is clearly a SIMILARITY to Ghost, I don't want it to seem like this band is in anyway a ripoff, they just exist in a similar aesthetic spheres. They really do have their own sound, with vocals that are as smooth and soaring but also pretty unique on their own, and the excellent guitars, while focusing in on a cleaner distortion, explore a slightly different riff-set. Driving heavy rock anthems like "Baron" and "Setting Sun" are spiced up with layers of melodic metal riffing and quality leads that clearly escape the parameters of poppy metal. They feel like a blend of hard rock, blues, alternative and maybe even a little doom, but this in no way limits them, because they excel in spacey atmospheric passages, acoustics, and they are more often than not as catchy as fuck, with this eponymous debut already killing it. Sebastian's vocals have a memorable clarity to them, not terribly unlike Tobias/Papa Emeritus but also casting out inflections of 80s new wave singers like Simon le Bon, especially when he's sustaining his note. So if you wanted to hear that British pop stud singing over harder rock material, Chronus is a pretty good proxy that you might enjoy, it creates that same sort of clean-cut, dreamy vibe.

But as the guy is on the vocal, it's really the instruments that dominate this with an excellent riff set that feels like you've dived into some wistful fantasy. The bass playing is quite good, the guitars spacious and involved, and the drumming has the pure rock power to drive it all forward. There are no songs here weak enough that I'd want to skip them, but a couple do stand out a little further, like "Setting Sun", or "City of Light" with its desperate melody and almost Amorphis-like verse guitars. But there's plenty of variation throughout the debut that it's best absorbed as a whole, and at a brisk 32 minutes, you won't really have any chance to get bored, assuming you're open to the style. Great stuff that is, I fear, quite overlooked in the last couple years.