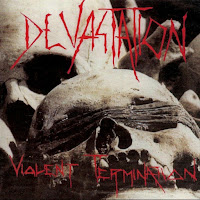 For such a huge state, I always felt like the Texas thrash scene was rather on the small side through the 80s. Sure, there was Cowboys from Hell in 1990 which was one of the biggest albums ever, and then you had a few cool bands like Rigor Mortis, Watchtower , Gammacide, and Agony Column, but there was no California/Bay Area-level explosion; a lot of it was no doubt relegated to an underground of demo hopefuls. One other band that achieved a fairly high visibility, but then fizzled out with the genre was Devastation, who released two strong albums through Combat, and really seemed to hit with the fans of that more excessive, aggressive side of thrash metal circa Dark Angel or Morbid Saint. But before we can get to that good stuff, there was Violent Termination, an album that sounds right in line with their speed and lethality, but one so rough around the edges that most feel it should probably remain forgotten...

And I don't necessarily disagree with that assessment, I just think I've probably heard worse. This album definitely sounds like a clunker in which the band really hadn't learned to gel together yet, but there are some positives to it, like the raw, scrapyard production aesthetics that make the guitars sound like they are being played in a studio full of rusted barrels and abandoned sheet metal. The riffs themselves aren't even all that bad if you're a fan of the Slayer school of nasty speed, but they tend to get lost a little under the trash can drumming, the fat, burping bass-lines and the unfortunate vocals. To be clear, Rodney was the front man on all three of their albums, but they just don't have that explosive, splattered vibrancy that he would adopt on Signs of Life. They instead feel like dull barking, with lines that syllabically don't even match up with the riffs half the time. I can kind of hear the comparable tone in his timbre somewhere, but if anything, you'd have to give him a reward for the most improved member as the band, 3/4ths of which appear on all three of their albums.

Sometimes the amateur rawness on these old thrash albums had a lot of charm to it, like Sepultura or Sodom on their early releases, but Violent Termination is just too dull. The riff patterns are certainly identifiable as a vicious brand of thrash, but the way the vocals are slung together, and the rather awkward mix of the drums leech of them of some of that potential nastiness we love from this old shit. You can clearly hear some of those Slayer influences, or even some Celtic Frost on the grooves of "Syndrome of Terror", but a lot of the writing is bland and half-formed, the vocals a little too loud, and the guitars, which were at this point clearly the most energized and competent part of the band, just don't stick the landing on a lot of tracks. The leads are spurious and appropriately whip-like in tunes such as "Death is Calling", and I kind of like the raucous tone on the guitars, it gets me pumped up but then there is simply no payoff. The lyrics are also comparable to a lot of other bands at the time, so there's no real problem in that area.

Ultimately, though, Violent Termination winds up sounding like an overlong demo from the average thrash band which jams over in that garage on your street corner, and listens to all the right shit, but has yet to really forge its own worthwhile identity or master playing together. I don't want to be too hard on it, because we all know in hindsight that they were about to quickly meet those goals, but this one's very much skippable, even if you're in the market for some of the crudest, most 'real' thrash and speed metal from the old times.

Posted by autothrall at 7:32 PM