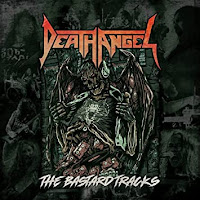 The third Death Angel live album was recorded in their home turf San Francisco during the plague times, and boasts what I think must be the best sound they've ever achieved on one of these things. Seriously, your band has to have it quite together to sound so good during a live set, and whoever witnessed this in the moment was in for a huge treat, as the band tear through a fairly balanced set of material old and new. Now, sadly, they fail to represent the greatest album of their career, The Ultra-Violence, and for that reason I cannot give it my utmost recommendation, but for what they do include here, and regardless of what you might feel about their modern recordings, this is all delivered with the passion and fire that the band always reveled in.

Funny enough, since the reliance here isn't always on Mark screaming, but using his more gritty mid-ranged shouts, they sometimes come off like a faster, thrashing Armored Saint, which is not a bad thing, but then he'll pitch out one of those bloodcurdling lines and you'll be right back where you need to be. The rhythm guitars sound excellent, the drums mixed at a good level that keeps propelling the set along, and the backing gang shouts also sound quite fucking awesome. The bass isn't terribly loud but at least it's audible and you wouldn't want to get in the way of how excellent, clear and aggressive the rhythm guitars and leads sound. While I like a lot of the band's newer albums, some of that material tended to flow together for me in this set, but then they go into a few Frolic through the Park tracks like "Guilty of Innocence" or "Why You Do This", and even if I was never the biggest fan of that sophomore, they sound quite good in the presence of the more modern choices.

It's just a bummer there is no "Evil Priest", "Voracious Souls", "Mistress of Pain", in the set, or even "Bored" or "Seemingly Endless Time". The choices could be better, but maybe for one reason or other they're sick of all those, or I'm the only shmuck in existence that would want to hear them. Granted, I did see the band at the Channel in Boston when they toured around Act III, and they do include some of these on earlier recordings, so I'm just nitpicking, I've had my chance to hear my favorites performed. Maybe I don't connect as much with their choices, but regardless, The Bastard Tracks sounds very good, it's probably their best live album, and there's also a bonus DVD with live performance and commentary, some value for the fans who still shell out their coin for live recordings in the Streaming Age.

Posted by autothrall at 7:37 PM