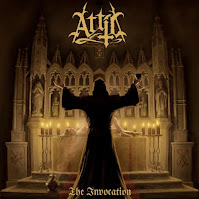 I get it, Attic, I do. There hasn't been a King Diamond album in many years now, much less a great one, and that's a void you intend to fill, and I thank you for it, although others might not be so keen on a sound that so zealously guards the throne. But if imitation is the sincerest form of flattery, you'll have Mr. Petersen up smiling through the night. Or at least I hope he stays up through the night, because I'd be disappointed if that were not the case. At any rate, you've got the falsetto voice, the classic riffing style, and a lot of ideas that thankfully do not always attempt to rip off our lord and savior on a 1:1 basis, so does your album leave the same sort of impact as those legendary works of that 1986-1990 period, which represented one of the greatest streaks in the genre?

Not a chance, but I have to give these Germans credit, because while there a lot of bands out there emulating King's present and alma mater, Mercyful Fate, it seems Attic is far more interested in the theatrics and Gothic/occult horror hysteria of his solo works, and I'm just the sort of heretic that SLIGHTLY prefers those albums to the classic Fate efforts, primarily because I am a huge fan of Andy laRocque's playing, just a fraction more than Denner and Shermann; the leads and compositions he comes up with alongside King himself are like a Bible to me. This band has a lot of the tools to make this happen, but they don't quite nail the feel beyond its surface aesthetics. 'Meister Cagliostro' certainly has some pipes to pull off the falsetto, but he almost seems a little too confident, even more than King at his most reckless, and the result is that it seems a little too loud and piercing which drowns out some of the riffing beneath it. And it's not because the guitars are weak, the riffing section is fairly solid with some heavy hitting chords and loads of melodic adventures, but it just feels a little too unbalanced and occasionally verging on caricature, and that's not what we want.

The leads also aren't that great..competent, and suited to the style of surging heavy metal that Attic is writing, but far from impressive, they're not going to hang around in your brain for 30 years like Andy's do, in fact they might not make it 30 minutes. The organs are nice in the intro and interlude, but that's almost to be expected, and the metal doesn't always live up to it. A couple of the songs do stand out, like "Join the Coven" and the excellent title track itself, but they're unfortunately not all created equally, and the album doesn't really achieve greatness in its emulation. There are also quite a lot of song titles which feel like direct proxies for King Diamond/Mercyful Fate tracks, and I really don't think that's necessary...come up with your own cool concept/horror story, folks, we already get who you sound like from hearing your SOUND. Now, having said all this, The Invocation is still a passable effort if you want some more in that King Diamond mold, there's obviously some love and effort that you require to attempt this style, and Attic will actually take their time and improve upon it a half decade later.