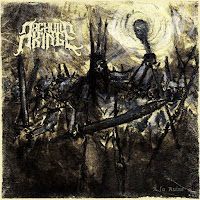 The blackened thrash/speed metal niche has been exploding for quite some time now, and rightfully so, because it presents some of the most exciting, dangerous, and authentic feeling music in the genre. But if I'm being honest, I can't recall a lot of such bands hailing from the French scene, a situation Archvile King hopes to right upon their full-length debut. To be fair, À la ruine doesn't go quite to the leather & spikes limit quite as much as many of their international counterparts...there is no real sense that this band is here to party on your skull like Venom did in 1980. No, this is more of a nasty, sinister early 90s black metal sound with a few rhythmic breaks that hearken to the classic Bathory years, maybe molded through a sense of rhythm and melody that was later expounded upon by others of the Swedish scene, like Dissection, Dark Funeral or more recently a Watain or Vampire.

It's another record that opens with some great, rustic acoustics and a female spoken word, that don't quite set you up for what's to come, but are quite nice sounding regardless (and the acoustics do return). The meat of this album, however, is mid-to-fast paced, searing and evil black metal delivered through streams of bleeding chords and the occasional serpentine sense for melody. Vocals have a harsh, repressed rasp to them which is often paired up with a more narrative, barking style not unlike the notorious Famine from the same scene, and I do like a few of these moments a lot, they stand out quite well against the rapid rhythmic substrate. As for the strength and quality of the guitars, there are certainly moments that stand out in cuts like "Celui qui vouvoie le soleil" or "Dans la forteresse du roi des vers"; even if a lot of what they play does feel rather conventional in structure, you are going to be slapped in the face with those 'moments' that will swell your appreciation for the effort.

Production is that raw/clear hybrid that was prominent in the classic efforts of the 90s, and I think fans of such classics as In the Nightside Eclipse, The Somberlain and Born of the Flickering will get a real charge out of it. The melodies and restrained leads are all well placed, the beats sound great forcing this forward like the undead army on the march, and yet there's a pretty good variety of tempos here, from the memorable acoustic, atmospheric guitar segues (like the title track) to the slower, double-kick powered sections that roll over you with their power. What's even more impressive is that this is, as far as I can tell, the product of a single musician...yes, the 'bedroom' or 'basement' black metal act continues to evolve into one that can rival even the most seasoned, full-rostered bands! À la ruine is really well put together, and an easy recommendation to fans of both the Scandinavian classics of decades past, or the more historical, Medieval French black metal circa Aorhlac,  Sühnopfer or Véhémence. This record kills, so check it out and boost the signal!