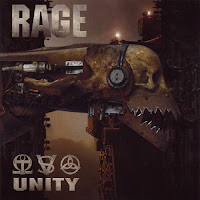 I've had plenty of positives to say about the 90s Rage records, even if I had spent that decade mildly disappointed, but come 2002 and the sophomore of its new power trio lineup, I was confronted with what would certainly become my favorite of the Germans' albums outside of the first five. Wagner, Mike Terrana and Victor Smolski had written a storm of a record which accented upon many of the strengths of its predecessor but ramping up the musicianship and arguably the heaviness. Because, make no mistake, while Unity is as varied as some of its neighbors in their catalog, this is one hard hitting effort that absolutely helped redefine this aging act for a whole new generation, while keeping them current and distinct among the other burgeoning Euro power metal acts.

Lead by Peavy's vocals, which are definitely lower and angrier and less ranging than some of the old albums, but still perfectly sculpted to go along with this particular sound, Unity is a positive step forward. Victor's rhythm guitars here are beastly, iron-clad, with a bulky tone that works whether he's firing on the faster material or going into some of his complex grooves. And yet they're supported by loads of little details, from his unending tides of catchy lead-work to an impressive array of synths which serve as a further bolstering to the louder guitar tone. Make no mistake, this album is just as classically-inspired as some of the others which Peavy and Victor wrote together, but it's the way they integrate it here so that it's a part of the whole that really blew me off my seat. Usually, they'd have these pompous multi-track conceptual bits that were kind of a neo-prog-classical style, which little insertions of the Rage we known and love, but here it all blends together seamlessly and helps this one excel on so many levels.

Rarely does an album feel so all-over-the-place and yet coherent at the same time, but listen through the proggy escape of the instrumental title track finale, or the bombastic choirs woven into "Dies Irae", and how well they collapse into the band's riffing momentum and be stunned. There are literally about 150 or more great riffs on the album, and they're often busy as hell, with a lot going on, developing into one another with a level of foresight you don't hear from many guitar heroes. The first triple combo of tracks here, "All I Want", "Insanity" and "Down" instantly thrust into my top playlist the band has ever written, balancing off this new aggression with some classier hard rock and metal patterns that would have been legendary if they were issued in the 80s. Mike Terrana's muscular framework ensures that everything else proceeds effortlessly, he's arguably the main reason all of this ties together due to his consistent battery even during its more left field moments. The bass also sounds fucking spectacular here, pumping through the depths of the mix.

Not every track here is equally legendary, I grant you, and a few near the latter half of the disc do drag it down just a point, but nothing is bad, and I can promise there's at least somethin catchy on every single cut even if a few of them lag behind. The bio-mechanical Giger-like cover artwork featuring the Soundchaser is pretty awesome, and it's nice to see them bring that mascot back into some prominence, not that they'd ignored him much, but like their classic album covers to Perfect Man and (the real artwork for) Secrets in a Weird World, this one just transports you away into that same realm of imaginative nostalgia their classics have always conjured up. The lyrics are all pretty relatable and in that way it also reminds me of Perfect Man, and this really just has anything I could look for from a power/heavy metal album in the 21st century...a go for the throat attitude, gobs of dizzying musicianship and no sense whatsoever that this scene was anywhere near over. I'd argue Unity sounds modern even by today's standards, two decades later. What a statement.