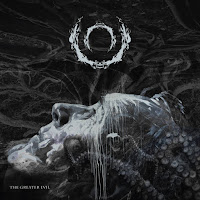 There's a dichotomy on this latest Cold Cell album, on which I find the moments where they drift furthest away from the core considerations of their genre to be its most inspired, interesting and memorable, while a lot of the heavier elements end up feeling repetitive and less capable of putting me into a trance. That's not to say they are weak when they are piling on their largely mid-paced atmospheric black metal, which is likely the dominant force through much of the 49 minutes of material, but every time they drift in and out of some dream-like fugue, I am transported to a place that is more haunting and capable of getting under my skin in a shorter period of time. I think it's just a matter of the actual black metal riffing becoming a bit more commonplace and less able to offer the unexpected.

To be fair, they do balance out these two extremes at several points, but I found that overall my engagement with the material varied, and while we're not dealing with excessively bloated songwriting, most of these are around the 7-minute mark, which is long enough for the tides of tedium to begin to settle in if not to completely overtake you. But listen to that intro to "Scapegoat Season", with the guy singing in just an everyman's voice while the creepy, reverbed acoustic guitars and roiling ambience escalate, or "Open Wound" with the freaky swell of orchestration and desperate, open rasps, these sorts of things set up the band to just deliver an emotional juggernaut, and when it comes to the heavier riffs they just don't really honor the expectations. Sure, the pacing and the retained atmosphere do their job, and sometimes the vocals, when they're pitched at a more tortured intonation, but just as often you're getting these riff patterns that just sort of drone repeatedly and uninterestingly off into the distance.

I'm probably making it out to sound worse than it is, because by no means is this a bad or incompetent effort. In a few spots, it's outright transcendent. There's certainly a consistency to the graying, wasting mood of the album, and the sustained riffs over the busier but almost monotonous blasting backdrop, with its layered and eerie guitars. They set a mood and stick with that, so if you dream of black and white, decaying shores, or can imagine your own being disintegrating into snowy gray flecks in slow-motion, this is an appropriate score. I think, as it is presented, the album passes muster, but there were just a few parts where I thought they were going to absolutely crush my soul with some blazing riff or rhythmic pattern emerging form one of these lushly melancholic ambient-like passages and that just never really came about. But if you're into spacious, dissonant black metal with some surface similarities to the French scene circa Blut Aus Nord or Deathspell Omega, only not quite so twistedly adventurous or potentially explosive, then you could do much worse than to check out Cold Cell.