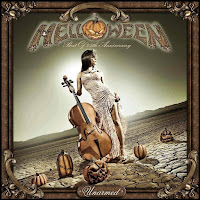 I suppose I can give Helloween a little credit for holding off a quarter of a century into their career before slapping us with the lame, obligatory acoustic album, which I'm sure I've ranted on about before as a major pox within the hard rock and heavy metal scenes. To go a little further, the Germans didn't just decide to sit around and record your bland and typical 'campfire acoustic' sort or album, but to render a number of cuts throughout their career into soft rock tracks. Sure, you get the cleaner and milder guitars as expected, but there are beats, horns, and whatever the group can muster to make these heavy metal classics sound like they belonged on major lamestream radio channels in the 80s and 90s. There is always this tendency to feel like such adaptations help a band reveal its more touchy, feely, kid-friendly emotional side, but the real rub here is that Helloween has already possessed those qualities in spades, even when they were plugged in and cranked up in distorted bliss, howling and screaming along their brilliant, anthemic power metal.

So this is basically what Billy Joel, Meat Loaf or Miami Sound Machine might have sounded like recording a whole record of Helloween covers, but with Andi still singing. It just doesn't function on any appreciable level other than comedy that NOBODY ASKED FOR. The songs can't decide whether they want to really go for that lighter touch, or maintain the intensity, so you've got the drums still pounding along and very little of the mighty guitar power or momentum over them to matter. Hearing a sax solo in the center of "Dr. Stein" is goofy as all hell, or a version of "Future World" which sounds like its being performed for a Country jamboree warmup to a Christian Rock concert. Tunes like the throbby soft rock "If I Could Fly" and the folksy jig version of "Perfect Gentleman" lack all the punch required of those amazing riffs and choruses. Where they get really dramatic, like the purer piano balladry of this "Forever & One", it does seem a little more fitting as an alternate, but then "I Want Out" brings you back to the realization that this whole idea is unnecessary and unwated.

Just because you're a popular, veteran band with a bunch of record contracts doesn't mean you need to work yourself up to something like Unarmed. Just because you CAN, does not mean you SHOULD. I am not one to scoff entirely at every idea to trivialize and make heavy metal into an amusing form...if Helloween had sponsored, say, an 8-bit chip-tune covers album of their material, that might actually be awesome. But who needed this plastic pop rock castration? Find them and bring them forward, so we may stone or waterboard them or whatever torture seems appropriate that they relent. The bonus DVD with a couple videos, or the 1-2 tracks here that don't go completely belly-up in their translations just don't make up for all the rubbish you've got to rummage through to get to them. This nonsense makes Pink Bubbles Go Ape sound inspirational by comparison. Fortunately Helloween is such an excellent band on a normal basis that this doesn't really dull my perception of the band other than as some sort of unfortunate, ironic gag that didn't stick the landing.