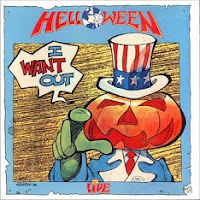 In 1989, as a steel-struck teenager, I was so hyped up on Helloween that I bought this live cassette the instant I first laid eyes upon it it. I can still recall digging out that $6.99 from my pocket paper route money, happily slapping down on the counter at Record Town in my local mall, striding proudly forth with my new-fangled quasi-mullet and thrusting it straight into my Walkman. It might sound like some stereotypical scene out of one of those awful TV shows or films that tries to thrive off nostalgia for the 80s, but in fact it was our reality back then. At the time, I didn't have a high opinion of live albums per se...Unleashed in the East pretty much brought me into the genre as a tyke, and Live After Death was still in a regular rotation, and when I looked at the track list here I thought it was a little skimpy, but fuck it, this was one of my favorite bands to emerge from my #1 label of the era, Noise Records, I absolutely worshipped at the feet (stalks?) of the debut EP, the first three albums and the Judas single, and I was going to follow them through thick and thin on all their major label adventures, and back again. And I always have...

I even remember at the time knowing that this one was put out under another title overseas, and I think the track list is edited just a bit different, and there's a cool cartoon cover of the band playing live, damnit all if I don't like our version a little better. I believe in Uncle Pumpkin. Well, I listened to this about 3-4 times and then quickly delegated it to the tape rack right beneath Keeper of the Seven Keys Part II, remember those old tape racks where you'd have to move all the tapes each time to keep them in alphabetical and chronological order because you were a huge dork that didn't plan well in advance? I guess it was just me. At any rate, I found the sound quality on this totally acceptable, maybe a fraction clunky in some of the mix, but for the 80s it definitely was clear and professional enough, I had just decided that I'd never listen to this at any point over the studio works that I so adored. It's now about 32 years later, and I'm breaking this thing out for the first time, and the memories of the experience seem to have phased me more than the recording itself.

The distribution of material here is largely on the initial Keeper duology, probably because they wanted to focus on songs with Kiske vocals and promote their RCA material, but they do manage to close out the B-side with an epic rendition of "How Many Tears", and if my ears aren't failing me it even sounds like Kai is doing some faint backups along Kiske's impressive take on it, and the bridge with those airy, open guitar harmonies sounds fucking fantastic. The guitars and drums sound tight, you get a fair helping of Markus' lines in there, and the leads really scorch. Stage banter is fun enough for what you get, silly schlager melodies, definitely sounding like some Germans a bit nervous to get out there in front of the international audiences (this being recorded in Scotland and England), and I don't think any of the tracks stands out as weak at all, from the silly "Dr. Stein" to title track, which was obviously the hotness at the time. Even in my High School, where only a select few of us hanging out on Headbanger's Wall near the cafeteria even knew who names like Armored Saint, Running Wild and Celtic Frost belonged to, almost all of the glam, Ozzy and Metallica-addicted student populace knew this damn song and walked around humming or singing it all the time (of course they all heard it from MTV).

Listening to it so much later, I rather think I missed out on giving this one some more spins when I was young. Helloween has had such a massive legacy since, with a lot of changes, but this brings back the innocence and amazing potential I once felt for these Germans...potential which they mostly lived up to, mind you. I don't know if it's on the level of Live After Death or Live Without Sense, two of the rare lives that I listen to on a fairly regular rotation. There's just not much meat on the bones of this one, but I promise I won't wait three decades before it shows up in the queue again.

Posted by autothrall at 7:23 PM