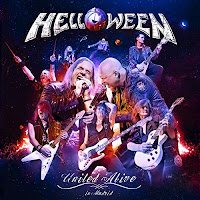 Although the culmination of the entire 'Pumpkins United' concept for me will be whether or not they can pull of their new eponymous studio album, to take this idea FORWARD rather than just paying tribute to their laurels, I think it's completely understandable how many would find it this 3-disc live experience, with two of those discs recorded in the titular Madrid, Spain. Hearing the old voices again mixed with the newer voice, these singers selflessly entertaining the fans, having fun singing TOGETHER, and leaving their egos at the door is something I'd like to see and hear a lot more often from these legacy bands...and to be fair, it probably happens more than we know, with old band members doing live or recording guest spots, but Helloween have been one of the few bands in all rock to take it this extreme.

Now, having said that, and while United Alive in Madrid is indeed a solid product that will answer your questions as to how all this might sound, the risk of having too many cooks in the kitchen is certainly being run, and although Deris and Kiske and Kai do an excellent job of not cluttering up the lanes too much, the songs just aren't going to be the way you're used to them, and if you're seeking those pure performances of your favorites, you'll have to put up with an unexpected shift across the lyric lines, and it does sound a little too 'occupied' or busy at times. I mean that's kind of the point, this is a big silly party to celebrate a band getting near 40 years on Earth, and a fantastic band at that, but if you want the most ideal live versions of songs you're going to better off tracking down other releases like High Live, Live in Sao Paulo or even I Want Out Live, to hear the tracks as they were mostly intended. This is about going over the top, and so it does. But fortunately the instruments are on fire, the production is very clear, you get a lot of between-song banter, and the crowd is obviously eating this up. They love it.

As for the track selection, you've got the entire 2-disc spread from Madrid, with a blend of tunes that focuses largely on what you'd consider 'hits' in their catalogue, a lot of which are from Keeper of the Seven Keys I and II, with a smattering of great tracks from the Andi years. There is a 14-minute medley of the really old stuff for Kai and I think one other tune ("How Many Tears") from that era, and I don't like that they set it up that way, I think I'd rather they had more full songs from that 1984-1985 era spread about like the others. So you're getting "Halloween", "I Want Out" "Eagle Fly Free", "Future World" and all the mandatory 80s classics, and then the amazing "Sole Survivor", "If I Could Fly", "Forever and One", everybody is happy, they're not exactly about to dip into the archives for an event like this, so if you're expecting to hear Kiske singing on "Paint a New World" or more stuff from Straight Out of Hell (other than "Waiting for the Thunder", which they do include) and My God-Given Right, as cool as that would be, it's not going to happen. They gotta shake their moneymakers for all the old fans paying the big bux to come see the classics.

The third disc has tracks recorded from other dates around the world, and these are much more curious choices, like "Kids of the Century" from Pink Bubbles Go Ape, which I think sounds better here than on the studio album, and "Why" from Master of the Rings, a deeper cut than you'd expect, and that one actually sounds pretty cool with the multiple vocalists. It all closes off with "Pumpkins United", the new (for the time) studio track with all the vocalists, and that one sounds almost as energized and fun as it does on disc, and it's the best way to psyche up the audience for the future, even if it's not included from the bigger performance. 'We just did all these classics for you, but we wanted to let you know there are more memories to come.' Well done, and that's United Alive in Madrid in a nutshell, the spectacle and the successful realization of a project from a band that loves its history and loves its fans. It's not the greatest live record ever, but it's a good one, and with that novelty added on it's one that all Helloween fans should at least check out.