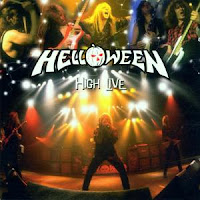 As a big fan of the first two Helloween albums with Andi Deris on the microphone, I was actually pretty excited to hear how it would come across live. Not only the great new material which his voice was written with and molded to, but also how he might handle some of the classics in the catalogue that Hansen or Kiske tackled. Enter High Live, a double disc of tunes recorded in Italy and Spain where I'm assuming the powers and popularity of the post-Chameleon Helloween were a little stronger than they were here in the States. I picked this up back at Media Play near the University of Massachusetts Amherst, back when that chain was a thing, and remember promptly putting it my dorm room stereo, then giving it a few listens, being satisfied if not terribly impressed, and then putting it away for a very long time.

Going back, I probably favor this a little more than I did in the 90s, and that's largely because I've grown into an even bigger fan of the Deris-era material, and I rather like the atmosphere present on these discs, which reminds me a lot of 80s live album favorites like Live After Death. The guitars are good and clear, but still have a bit of classic metal dirtiness to them, even despite the highly melodic nature of the playing on their material, and the loads of little detail in the leads, squeals, and effects in tunes like the excellent "Wake Up the Mountain". Drums are quite prominent, bass is set just right, and so too are the vocals, which are spot on for at least 80% of the time. There are a few lines where Andi's silky vocals seem to swerve a fraction off the key you're expecting, but I think you could say the same of almost all frontmen when there aren't studio re-dubs available. For the most part, though, he is all business and exactly what I wanted to hear. The selection on this album is also quite awesome because it focuses so heavily on Master of the Rings and Time of the Oath, which have become evergreen titles for me in the Helloween backlog. "Sole Survivor", "Where the Rain Grows", "Steel Tormentor", "In the Middle of a Heartbeat", "Perfect Gentlemen", "We Burn", it's all here...

So the question is, how does he sound on the classics? We get the answer to that a little after half way through the first disc, when they tackle "Eagle Fly Free", and you immediately notice the difference, since his mid-range, whispered pitch is quite different than his predecessor, and it doesn't translate quite as well across the verse and pre-chorus...however, once that chorus arrives, he sounds quite good. There is that slight, wavering quality to his voice that I've always enjoyed...he's not the template power metal singer like Kiske before him, but to this day I still think Andi is the most unique, and it's actually fun to hear how he is going to approach each line, what he's going to inject in there. He sounds even better on "Future World" and "Dr. Stein" where he uses that crazier, high pitch, but there aren't a lot of older tunes to be had...perhaps there were in the full set lists, but for this recording I think it's probably a good idea that they stick to the material where he's strongest, which is quite good.

These days you've got a number of live album options for your Helloween collection, and I'll get into a few more of them, but High Live stands out to me as one of the best for the reasons I've listed. The musical performances are great, this was such a strong lineup (regardless of what became of it later), and it's a positive showcase for a new vocalist that some were probably skeptical of, which is silly to think of in 2021 since he's had by far the longest stint fronting the band. Very glad I came back around to this one because it's stronger than I remember.

Posted by autothrall at 9:34 AM