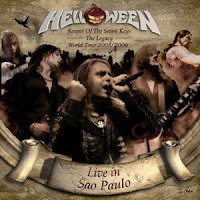 Metal is huge in South America. In Brazil. As it should be, because these people know their shit. Iron Maiden? Huge. Judas Priest? Massive. And Helloween? Why the hell not? Live in Sao Paulo captures the band on their Keeper of the Seven Keys: The Legacy tour from 2005-2006, and almost the entirety of the two discs and two hours of content was recorded in that very place, with the exception of "Halloween" and "Occasion Avenue" from gigs in Czech Republic and Tokyo...which is a little weird, because I always prefer to hear a band give a steadfast performance at a single gig, which would be the experience the concert attendee has, but at least they're open about it ('Live on 3 Continents') and they're tacked on at the very end of the track list.

This is one of their more lauded live offerings and for a good reason, it pretty swell and has a rather dynamic range of material, a broader spread than on High Live which in itself was pretty damn good. The band is reaching for a balance of their early classics as well as some of the new material off the excellent Keeper Part III, but it blends in pretty well together. It's got a pretty atmospheric sound to it, with a great deal of crowd noise that manages not to drown out the band, but it's almost like you can hear them singing along to a HELL of a lot of the lyrics, and it's pretty amazing...especially when they're in the midst of an epic like "The King for 1000 Years" or "Keeper of the Seven Keys". All of the tunes, new and old seem to mesh really well with the production and performance of this lineup, and it's all smoothed over into that modern fold they emerged with on Master of the Rings. The rhythm guitars and kick drums thunder quite intensely, while the symphonic keys blaze brilliantly against that heavier undertow. Andi's a monster on this one, his screams sound great and although he doesn't sound too much like Kiske on the oldies, I think he still does a knockout job, and so many other people are singing along that who cares?!

It's not always seamless, because the atmosphere often overwhelms some of the details and nuances of the tunes, but you just cannot beat the energy here between the band and audience, and for that reason it's surely the most EXCITING of their lives. You really feel as if you're standing there in front of the band, something I've actually done, and everyone is partying and enjoying that the Germans flew over to their neck of the woods to offer a professional pounding. It was great to hear selections form albums like The Dark Ride like "Mr. Torture" and "If I Could Fly", although I wouldn't have minded more of a representation from Master of the Rings, or the absent material from Walls of Jericho. The audio quality on the non-Brazil recordings is actually superior, almost studio level, so that compensates for the less ballistic audience participation, and this version of "Halloween" is pretty great, even if they're not the vocals you are used to. I don't know that I like it more than High Live, which was a little better focused on material that suits Andi, but it's certainly a positive and elaborate presentation.

Posted by autothrall at 3:37 PM