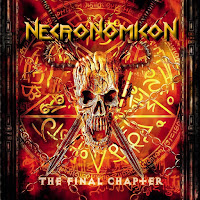 Although Necronomicon was once written off as a bit of a lower tier alternative to Destruction, it's amusing that such a comparison has become one of the real strengths of The Final Chapter. Almost from the beginning of this disc, you're belted with these meaty thrash riffs that sound a whole lot like that other band in their modern phase circa All Hell Breaks Loose and The Antichrist, and then the vocals arrive, in particular the chorus which sounds exactly like Schmier, and not a bad way, especially when pitching a chorus like "I am the violence!", which to my dumb American ears sounds like "I am the wiolence!" and just makes the whole thing all the more endearing. And this is actually a template for nearly the entire album, short and muscular tunes that definitely make you want to give or receive a beating.

And I'll tell you...I don't know that anything more is needed? For as aged as this band is, like their better known 'German Big Four' peers, they sound aggressive, driven, and quite far from the nursing home. Riff patterns here are exceedingly simple, and never quite original, but delivered with enough blunt force and then glazed with spurious leads, and even some functional atmospheric melodies as in "Wall of Pain". At some points, like in that same track, they'll graft the melodies even more directly into the verse or chorus riffs (like the intro to "Purgatory" which almost sounds like Running Wild for a second), and it just creates a well-rounded experience that proves there is some mileage left here. The vocals might indeed stay derivative, but if I'm being honest, that style of pinched, constipated snarl is a treat whether it's the original or not. Necronomicon also balances that off with some lower snarls and guttural barks to ramp up the heaviness, and they never sound too cheesy or ill-placed. The rhythm section on this one is just in perfect lockstep...you won't find a lot of interesting bass lines or drum breaks, but in order to drive the important factor of those riffs and vocals, it's 100% effective.

Could the tunes be more nuanced and interesting? Probably, but for what it's worth I listened through the whole album numerous times and never felt any desire to skip past anything, it's one of the more catchy and listenable efforts they've put out over their 30+ years, and nice and loud when the double bass batteries and carnal vocals start firing off in tandem. The cover art isn't the best with that samey sort of skull in the center and the font, but it's a minor complaint once you plug this in and start the headbanging. Necromonicon deserves all the credit for keeping itself alive and finding a consistent stride so late in their career, and of that lesser wave of Teutonic thrashers like Accuser, Darkness, Assassin, Exumer, and Vendetta, they seem to be one who has figured out what works and stuck to it, while leaving themselves just enough room to play around in. Good on them.

Posted by autothrall at 6:30 PM