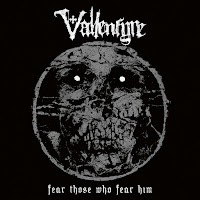 With A Fragile King, Gregor Mackintosh and company really seemed to be onto something, a blend of Swedish old school death metal with his melancholic Paradise Lost style guitar lines mixed in, but they seemed to slightly mutate away from that for the underwhelming sophomore Splinters. That record had a dirtier mix courtesy of Converge's Kurt Ballou, similar to other bands he had worked with (Trap Them, Black Breath, All Pigs Must Die, etc), and while that might have given it a little more savagery and street cred, it was the music itself which was increasingly lackluster and ultimately unmemorable. Three years later they would return to Kurt to record Fear Those Who Fear Him, an album which barks up much the same tree, but reaches an even lower branch.

This album definitely plays up the most of the three to its Swedish influences, and sadly becomes a pretty faceless affair at a time when there are just so many B- and C-tier acts who have oversaturated the niche to the degree it almost doesn't feel that heavy anymore. Sure, I'm an eternal advocate for the style, but it relies so heavily on atmosphere and QUALITY riff writing, which so many lack, and I find that a good number of the tracks here are just punctual, boring bursts of energy which have no redeeming riffs whatsoever. I feel as if the band could have just written 20 of these tunes and put out a deathgrind album for Nasum fans, only not remotely as good. For these sorts of 2-minute numbers, it doesn't seem like much effort was put into the guitars at all, just falling back on the production and tone for all its CRUSHING HEAVINESS which would mean a whole lot more to me if it was done by delivering some decent music. Cuts like "Kill All Your Masters" and "Nihilist" don't capitalize on anything but the barking vocals and d-beat fused aggression, maybe you'll get a wiry, spastic little lead but that's about all the surprise you can expect.

Where this album slows down a bit, as in "An Apathetic Grave" or "The Merciless Tide", and Gregor gets more into his doom comfort zone, is where I was able to wrench out any enjoyment of the sound. Not because these are exceptional tunes, but once in a while you got an attempt at one of those sad melodies, and the tone of the guitars is more of a benefit to those dreary chords. Mid-paced rockers like "Amongst the Filth" are also slightly better than the blitz tracks, but I'll maintain that I can't recall a single memorable rhythm guitar track through the entire album at any pace, just a whole lot of 'get it done' stuff that could be churned out almost instantaneously by musicians like this with little preparation. The drums sound heavy as hell, the whole album does, and you might get a little death metal break which feels so raw and old school and evil, but then the next tune will be some rubbish that wasn't even worth putting on tape. I'd say there's a passable 15 minute EP here, built largely of the longer doom tunes, which is unfortunately mired in mediocrity, and a production aesthetic which serves the aforementioned acts a lot better than it serves Vallenfyre. I don't imagine the band itself was much interested since they dissolved not long after this one dropped.