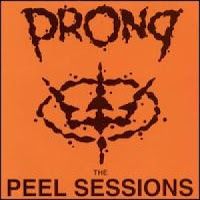 Once upon a time, The Peel Sessions was like an MTV Unplugged, only for cool people, featuring cooler bands, and not unplugged. John Peel was an eclectic English radio host who would promote all manner of underground musical genres by having bands perform a quartet of tracks live on the air, and a good number of these were turned into commercial products. This has actually become quite a popular premise in the age of YouTube, with several radio channels or online shows hosting lots of varied bands in comfortable little studio settings and giving fans a free, concise show. Back in the early extreme metal scene, names like Carcass, Bolt Thrower, Napalm Death and Extreme Noise Terror were part of this, and the Peel Sessions arguably helped grind and deathgrind reach some of its highest visibility...or audibility ever, during the late 80s and 90s. Prong was an interesting case as one of the few US bands to be broadcast, naturally it tended towards the British bands who were more local to the radio channel itself.

The trio's choices leaned heavily on Force Fed, their most recent album at that time, with "Decay" and "Senseless Abuse" represented, while Primitive Origins is present through "In My Veins". The final selection was pretty interesting, "Defiant", which would be the B-side on the "For Dear Life" single to promote the forthcoming Beg to Differ. It's a passable tune, one can see why it wasn't rhythmically interesting enough to make the album itself, but what really surprises me the most is how it sort of set the tone for all the material here, which comes off cleaner and tighter than you'd expect from the band's first two official releases. On the one hand, it shows Tommy Victor and crew were quite proficient and professional in the live arena even at this point, and on the other that the direction of their material would be using a punchier, more polished guitar tone. Although the songs sound fine in this context, I do admit that they lost a bit of their edge and volatility for me, but then again live sounds offer differ for many bands; there's simply a small chance that you'll always be able to reproduce the studio conditions in either a live venue or live broadcast.

I do think the bass line suffer here a little, drowned out by the snap of the drums, that pugilistic guitar tone and the Victor's McGruff the Crime Dog vocals, but otherwise it all sounds pretty smooth, the playing nearly perfect to the studio recordings. I doubt I'd ever go to grab this when I prefer the more uncouth Force Fed versions of the songs, but it's cool to hear "Defiant" as I have never owned the single it appeared on. This is another of those releases which has been out of print now for going on 30 years, and so today it serves largely as a collector's item and tribute to Peel's legacy of having on great bands which he saw something in, many of which have gone on to steady or illustrious careers despite having little to no coverage in more mainstream access media outside their genres. It was a little more exciting when it came out, I remember grabbing all the cassette versions of these when I could find them, but few of them had anything I didn't already own from the bands on their albums.